Lady in the Water (Combo Edition)

Overview - Cleveland Heep, a stuttering apartment superintendent, encounters a girl named Story swimming in the complex's pool. He soon learns that she comes from the Blue World, and has a message for mankind. Will he be able to help her complete her mission?
OVERALL
Worth a Look 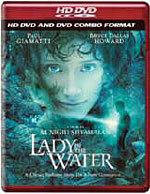 I can't believe I actually liked this movie -- as a confirmed M. Night Shyamalan-hater, this was the exact opposite reaction I expected to have to 'Lady in the Water.' 'The Sixth Sense?' Didn't care. 'Unbearable?' Exactly that. 'Signs?' The worst two hours of my life. 'The Village?' Didn't even bother to see it. So I expected nothing more than to laugh, chortle and throw popcorn at the screen all through Shyamalan's latest pretension-fest. Instead, and in betrayal of all common sense, I found myself feeling a begrudging appreciation, not only for the film's sweet-natured, whimsical quality, but for Shyamalan's gutsy passion for material that is utterly and completely ridiculous.

Make no mistake about it, the "bedtime story" Shyamalan tells in 'Lady in the Water' is indeed absurd. Paul Giamatti stars as Cleveland Heep, the superintendent of a middling Philadelphia apartment complex. On the surface, Cleveland seems like a sad sack -- laconic, dispirited and suffering from a severe stutter, he seems resigned to a life of loneliness and regret. But we know that in any Shyamalan movie, one's reflection tells only part of the tale, and Cleveland has many secrets. One of which is about to be unlocked with the sudden appearance of a mysterious woman named Story (Bryce Dallas Howard). With a penchant for late-night skinny dipping in the dingy pool in Cleveland's apartment complex, it seems Story is actually a Narf from the Blue World, and she has a very special message to deliver to mankind. But (stay with me here) Story is being hunted by the Scrunts, a pack of ferocious beasts who fear the wrath of a vengeful race called the Tartutic. Against all logic, Cleveland pledges to help Story in her quest, and enlists the aid of the many diverse tenants in his apartment complex, including a kindly Asian mother-daughter team (Sarita Choudhury and Cindy Cheung), a chronic puzzle-solver Mr. Dury (Jeffrey Wright), and the most bitter movie critic ever to walk the Earth, Harry Farber (Bob Balaban). Only when when a giant eagle, the "Great Eatlon," comes to carry Story away will Cleveland know he has succeeded.

The funny thing about 'Lady in the Water' is that I liked it precisely because I hate fantasy movies. I just can't get into fairies and elves and all that sort of thing. (Hey, I'm not knocking it -- I'll happily pay to see every horrible '80s slasher movie again and again, so far be it for me to judge.) But 'Lady in the Water' may be the first movie of its type to dispense with most of the trappings of the genre and completely root its mythology in a drab, believable, every-day setting. Even Shyamalan's visual style is sedate and nondescript. It is almost an anti-fantasy Fantasy, if such a thing exists. But I liked the contrast between material that is utterly fanciful and a cinematic aesthetic that is absolutely not. Somehow, it allowed me to believe in all this Narf and Tartutic silliness, and engage with the characters enough that I believed wholeheartedly in the world Shyamalan created. And though many complained that 'Lady in the Water' ultimately makes no sense, I disagree. It is a story told in metaphor, so if you look beneath the surface, think a little, and connect the dots, it has a genuine integrity and cohesion that some simply failed to see.

The film's performances are also refreshingly free of condescension. Howard has an earthy, natural physical quality, but her dialogue delivery and mannerisms contain just enough of the ethereal to make the character truly unworldly. And Giamatti again shows how restraint and subtlety can speak volumes over hysterics and arm-waving. Though Shyamalan saddles him with an admittedly shopworn back story, somehow Giamatti invests the cliches with enough pathos that I bought it anyway. I also liked the quirky tenants of the apartment complex. Like something out of Tod Browning's 'Freaks' meets 'The Hotel New Hampshire,' it is admittedly hard to believe such a cast of characters could all live in the same building. A "kooky" chinese woman with vast knowledge of Narf mythology? A lopsided body-builder who knows how to spot a Scrunt? A brilliant puzzle solver whose son just happens to find salvation on the back of a cereal box? Still, I understood that Shyamalan was aiming for a surrealistic microcosm of our American melting-pot culture, so even here, I went for the ride and let my subconscious figure out the details.

Perhaps no amount of aesthetic musing will convince the cynics to see 'Lady in the Water.' The critics ripped the film to shreds, as apparently they felt it was about time the arrogant Shyamalan got his comeuppance. Audiences, too, stayed away, even though 'Lady in the Water' seems like the director's most inaccessible film yet. Also not helping matters was the big brouhaha surrounding an authorized biography written about Shyamalan that hit bookstores just at the time of the films' release. In it, and apparently with little tact, Shyamalan publicly lambasted Disney for refusing to fund 'Lady in the Water,' even though the studio gave him his big break and let him find a home for the project at rival Warner. None of this is the kind of publicity that is going to help sell a movie. But regardless of whether Shyamalan is an ungrateful curmudgeon or an underappreciated genius, ultimately few will remember such tabloid fodder ten years from now. Go ahead and mock, but I think 'Lady in the Water' may someday emerge as a nifty little cult film whose merits far outweigh its flaws. Perhaps I'm the only one, but I actually think it is M. Night Shyamalan's best film yet. 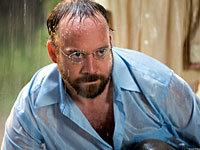 Warner Home Entertainment presents 'Lady in the Water' in 1.85:1 widescreen and 1080p/VC-1 video. Unfortunately, the transfer mirrors the theatrical presentation I saw, which often had a visual look akin to dirty bathwater. I do find it curious that M. Night Shyamalan continues to bathe his films in such blandness, but far be it for me to question an auteur.

In any case, this appears to be a good approximation of the source material. No problems with print anomalies, weak blacks or washed out contrast here. Again, though, colors are quiet drab. Exteriors often look overcast, with blues and greens the only hues approaching a look that might be called vibrant. Grain is fairly consistent if unobtrusive, and softness runs rampant. As a result, depth can't compare to the most three-dimensional high-def presentations I've seen, though a quick compare with the DVD version on the flipside of this combo release reveals a fair upgrade in sharpness and detail. Compression artifacts are not an issue, and chroma noise is rare. The only surprise was a bit of edginess to the image, a problem that also marred the standard-def version. Perhaps an effort was made to improve the soft look of the film? While it is hardly severe, any shimmering is still hard to accept on HD DVD.

Here's a weird one. Though Warner has included a Dolby TrueHD 5.1 track for 'Lady in the Water,' there are also Dolby Digital-Plus 5.1 and Dolby Digital EX Surround options, with the latter offering an extra center surround channel matrix-encoded in the bitstream for extraction by EX-capable audio set-ups. This embedded bonus is lost on the TrueHD track, so in this case at least, there is a trade-off if you go lossless. (Note that both the Dolby TrueHD and Dolby Digital-Plus tracks been dropped completely from the Blu-ray version of the film.)

That said, the film's sound design is so subdued I scarcely could tell much difference between the various options. 'Lady in the Water' is filled with very long sequences of little or no sound -- often only a single atmospheric, droning effect will gently murmur in the surrounds, and even dialogue is sparse. The rear channels only come alive in bursts, such as during the attacks by the Scrunts, and the fantastical climax with the giant eagle-thing. In these moments, the TrueHD track had a noticeably fuller presence, but at the same time, the EX track offered more seamless integration of the rear channels. I still preferred the TrueHD track overall, as bass was also stronger and dynamic range improved. But perhaps next time Warner will give us a full Dolby TrueHD 6.1 track? 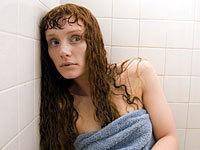 'Lady in the Water' is not overflowing with supplements, but there is enough here to satisfy most fans of the film.

The main attraction is the 35-minute, six-part "Reflections on 'Lady in the Water'" documentary. Unfortunately, any good dirt on the M. Night Shyamalan/Disney flap was snipped, so the majority of the feature is ass-kissy. Though no one proclaims Shyamalan a genius, some come close. On-set interviews with Paul Giamatti, Bryce Dallas Howard, Bob Balaban and the like are laudatory towards the story and Shyamalan's theater-like support of his actors. Unfortunately, I got so sick of hearing about how 'Lady in the Water' is a "bedtime story" and a "modern fairy tale for children of all ages" that I started to tune out by the end.

"'Lady in the Water': A Bedtime Story" is just a five-minute commercial for Shyamalan's illustrated children's book of the same name, and features the director reading select passages aloud over still images. The handful of Alternate Scenes are mostly dull and forgettable character-builders, including some wisely-excised bits with the film's weakest character, the critic played by Balaban. The scenes are all of fair quality, and are presented in windowboxed 480i video only.

Also included is a two-minute montage of Auditions footage, plus a three-minute Gag Reel that quite frankly is not funny.

Rounding out the fun is the film's theatrical trailer and teaser. Note that while the back packaging for this HD DVD release states that the bonus features are presented "Partially in 1080p or 1080i High Definition, and partially in 480p or 480i Standard Definition," my Toshiba HD DVD player's display only indicated 480p/i video on all of the extras. Maybe I missed something?

Given my personal tastes, 'Lady in the Water' is a film that I should have hated. Yet I found myself gently lulled into its charming if admittedly ludicrous fairy-tale world. Still, I expect I will remain in the minority as one of those who can tolerate the film. This HD DVD release too, is solid. The transfer may underwhelm some, but it accurately reflects the theatrical presentation I saw, and the extras are nice, too. Plus, we get a Dolby TrueHD track, which is always nice to see. So, for those with open minds and bigger hearts, I guardedly recommend 'Lady in the Water.'

Sale Price 6.99
Buy Now
3rd Party 2.99
In Stock.
See what people are saying about this story or others
See Comments in Forum
Previous Next
Pre-Orders
Tomorrow's latest releases