Nine Inch Nails Live: Beside You in Time 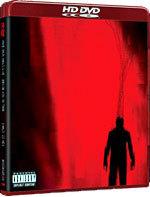 Like any other fan of "alternative" music (whatever that means these days), I ate up Trent Reznor's earliest efforts "Pretty Hate Machine" and 1994's multi-platinum "The Downward Spiral," the latter of which remains the band's commercial (and arguably artistic) pinnacle. Then came 1999's "The Fragile" double CD, which was a solid effort but hardly broke new ground. Like many other mainstream fans, it's after that that I kind of lost track of the band.

Which is why it was such a shock to throw in 'Beside You in Time,' the group's document of their quite successful 2005/2006 "comeback" tour in support of "With Teeth." The Reznor I remember was a somewhat lanky goth dude, his chiseled facial features framed by long black hair and mounds of black eye shadow. He now looks like industrial music's answer to The Terminator. Reznor is so buff and close-cropped that his neck looks bigger than my waist. And he certainly hasn't mellowed with age -- his glinty stare sharper than a dagger, years of touring has perfected his roof-raising howls to a hellish boom, making him if not rock's very own Anti-Christ than one Very Important Demon. With teeth, indeed.

All of this, in my opinion, is a good thing. Most bands nearing their twentieth anniversary have either totally imploded or degenerated into a walking jukebox -- a nostalgia act stuck grinding out the hits while enduring tepid applause for the obligatory "this one's from our new album!" shtick. But the intensity on display by Reznor and his top-notch musicians puts most bands half their age to shame. Whatever you may think of NIN's more recent material, this is still some of the loudest, most abrasive rock music you're going to hear anywhere on the planet.

As a film of a live performance, 'Beside You in Time' is a more straightforward affair. The stage set is typically impressive, yet simple. Live performance is at the forefront, with only a single gigantic LED video screen behind the band, so interaction between members is never overshadowed. The images have an impressionistic quality when viewed up close, yet form a compelling unity when shot from far in the background. They also wisely do not simply flash footage of what is happening onstage, but create unique, artistic forms that bring fresh shading to the songs, and keep the presentation dynamic and visually stimulating. Add to that a terrific light show and enough smoke for a good-sized forest fire, and the band certainly still has its act together.

Song-wise, all the expected hits are here: "Closer," "Head Like a Hole," the recent hit "Hand that Feeds" and "Hurt," which Johnny Cash so hauntingly covered a few years back. Though likely no one is buying a Nine Inch Nails concert disc for power ballads and jazzy lounge numbers, the set list does a fairly good job of balancing out the most hardcore numbers with a few slower bits, lesser-known album tracks and the "poppy" hits, like "Head Like a Hole." But the biggest risk of all is that Reznor refuses to turn the show into a hit parade, playing just about every track off the band's most recent album -- 2005's "With Teeth." It's a gambit that works, as the crowd eats up every song. Whenever Reznor does finally decide to call it quits, one thing is for sure -- he won't go out quietly. 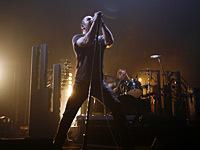 'Beside You in Time' is a true next-gen event. Trent Reznor has always been a pioneer when it comes to the latest and greatest in home video presentation, supporting DVD early on with extensive releases that made full use of the format's capabilities. Now, he brings his latest live concert discs to standard-def, HD DVD and Blu-ray concurrently.

Both of the next-gen releases receive identical 1.78:1 widescreen 1080p/VC-1-encoded transfers. The result on this HD DVD edition is fantastic. Judging any live performance that originated in HD requires a different set of evaluations than film-based material. Video tends to have a much clearer, "you are there" sheen -- almost like looking out of a picture window, and 'Beside You in Time' is certainly no exception. Shot entirely with high-def cameras, simply put, this is the best-looking concert video I've ever seen. Granted, the majority of music HD programming I've enjoyed this far has been via over-the-air and cable broadcasts, such as the concerts found on the HDNet and Rave all-HD networks where it is usually laced with compression artifacts, or upconverted from 720p. But 'Beside You in Time' is the perfect example of the superiority of pre-recorded formats like HD DVD -- the image is incredibly detailed, life-like, three-dimensional and free from obnoxious macroblocking.

Blacks are dead-on accurate, and contrast is pitch perfect. Colors are incredibly vivid. Reds, blues and greens leap off the screen, yet there is no chroma noise or other artifacts. Clarity is wonderful -- I've grown used to seeing excellent detail on HD-based material, and 'Beside You in Time' is truly top tier. There are times when I thought I was seeing blockiness or noise in the background, only to realize I was seeing the actual definition of the LED lights at the back of the stage set. It looks that textured. I was also impressed by the actual filming of the show -- director Rob Sheridan moves his camera nicely, and often employs bursts of rapid-fire editing to support the aggressive nature of the music. Yet artifacts are never a problem, with no posterization despite all the uber-bright lights, and again no compression artifacts. 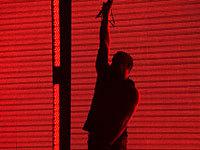 Equally as terrific is the disc's Dolby TrueHD 5.1 surround track (optional Dolby Digital 5.1 and 2.0 stereo mixes are also provided). And, for once, both the HD DVD and the Blu-ray don't get mismatched audio formats. Both releases are identical, so either way you slice it, you'll be getting a fantastic aural presentation that again ranks up there with the best live recordings I've certainly ever heard in high-resolution. (Note that in what is still somewhat of a rarity for live performances on disc, optional English lyric subtitles and English Closed Captioning are also included. There is even an "Audio Optimization" tool accessible via the Settings submenu. Kudos, Mr. Reznor.)

Predictably, 'Beside You in Time' sounds best when played loud. The low bass here absolutely rivals -- if not exceeds -- even the greatest action movie soundtracks. The tightness and force of the subwoofer is simply a whopper. The level of clarity to the entire frequency range is no slouch, either. Granted, you're not going to hear lovely flute solos and breathy Celine Dion vocals, but the level of clarity and precision to the sounds is palpable. Just a few flips back and forth between the TrueHD and standard Dolby 5.1 tracks also makes the improvements obvious -- Reznor's vocals reveal more texture, such as the sound of a light breath after the last line of the first verse in "Hurt" (which is inaudible on standard Dolby track). Guitars also have a more vicious feel, and again, those damn drums. This is goosebumps time for fans like me who love loud, aggressive rock.

As far as surround use goes, the mix is still front-heavy. However, that's appropriate for a live show -- we are watching the concert as if we're the audience, so the majority of the rears are reserved for crowd noise, sing-alongs, and some minor bleed of the music. Occasionally I detected more distinct incorporation of actual instrumentation. But in general, this is a powerful evocation of a live show, not a rejiggered 5.1 remix of studio-originated music. As such, this is a five-star presentation, and 'Beside You in Time' is absolutely my new music demo disc. 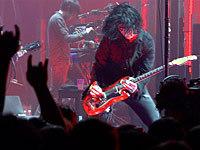 'Beside You in Time' does not offer a lot of fancy backstage bells and whistles, nor any sort of tour documentation. Instead, Trent Reznor again keeps the focus on the music, and all of the bonus materials here are of the bonus track variety.

First up are five extra songs from the "North American Summer Leg" of the tour, which included a slightly reconfigured set list. Two alternate versions of "Only" and "Closer" are provided, along with three tracks not played as part of the original set list: "Help Me I Am in Hell," "Somewhat Damaged" and "Non-Entity." Though the material is presented in full 1080p/VC-1 video, the quality is noticeably less superior than the main feature. The video is often less detailed and noisier, although that seems due to the source, not the encoding.

The rest of the video material is all presented in 4:3 pillarboxed 480i video, including rehearsal versions of the three songs "Love is Not Enough," "Every Day is Exactly the Same" and "The Collector." (Note that these rehearsals are the only extras of the bunch to offer Dolby 2.0 stereo tracks only.) There are also two promotional music videos, for "Only" and "The Hand That Feeds."

Finally, there is an Image Gallery of a few dozen live photographs, formatted at a 16:9 aspect ratio and encoded in 1080p video.

Note that the HD DVD is missing one feature of its Blu-ray counterpart. Three of the songs on the main feature ("Eraser," "Right Where It Belongs" and "Beside You in Time") offer an alternate angle of the rear-screen projection that can be toggled on-the-fly when viewed on Blu-ray. Unfortunately, this disc's documentation says that this real-time multi-angle feature was unavailable on HD DVD due to an "technical limitation." However, the actual alternate projection footage is still included here as an easter egg (see below).

'Beside You in Time' is simply a must for any Nine Inch Nails fan -- it's a great document of a great tour, and proves that just when some may think they can write off Trent Reznor as a relic of the past, he comes back and kicks everyone's ass. This is also such a strong HD DVD release that it is worth checking out even if you don't like Reznor's music. It is a terrific demo disc, with first-rate picture and sound, and a nice assortment of bonus features. Without a doubt, this is the best music performance yet released on HD DVD.

Sale Price 39.99
Buy Now
3rd Party 39.99
In Stock.
See what people are saying about this story or others
See Comments in Forum
Previous Next
Pre-Orders
Tomorrow's latest releases