Overview - None Available
OVERALL
Worth a Look

Before I knew who the Eagles were, I knew what "Hotel California" was. Looking back now, the well-known lyrical desert ballad whines along with a strange desperation that seems to mirror the tone of the on-again, off-again relationship of the band itself over the decades. Breaking up and reuniting more times than simple ego clashes can account for, the Eagles were a driving force in the 1970s rock-splosion in Southern California. Four of their six albums landed at the top of the charts (consecutively no less) and the band's popularity over the decades has hardly suffered from their inability to communicate with each other.

The title of their latest live concert, 'Eagles Farewell Tour I,' winks at the fans of other aging rockers who are constantly trying to cash in and keep the dream alive. Happily, the performance captured here is largely free of consumerism and seems to genuinely showcase a reunited band that had simply missed doing what they do best. Recorded in high definition in Melbourne, Australia, the concert lasts nearly three hours and packs a punch around every corner. Joe Walsh, Glenn Frey, Don Henley, and Timothy Schmit sit on the stage like old friends, effortlessly pouring out their souls through their music. Unlike their previous recorded live performances, the band members actually look like they're having a good time in front of their audience, embracing the music rather than their fame.

And the songs? The 30 set choices won't disappoint -- infectious hits like "Desperado," "Take It to the Limit," "One of These Nights," "Already Gone," "Sunset Grill," "Dirty Laundry," "Tequila Sunrise," "Take It Easy," and the aforementioned "Hotel California" all make a richly textured appearance. Rounding out the rest of the concert, are notable performances of "The Long Run," "New Kid in Town," "Peaceful Easy Feeling," "Wasted Time," "I Can't Tell You Why," "Lying Eyes," "Heartache Tonight," "Funk '49," "Life's Been Good," "The Boys of Summer," "Walk Away," "You Belong to the City," "In the City," "Life in the Fast Lane," "Silent Spring," "Love Will Keep Us Alive," "No More Cloudy Days," "All She Wants to do is Dance," "Life in the Fast Lane," and "Rocky Mountain Way."

The only minor disjointedness in the concert can be attributed to the few oddly inserted newer songs by Joe Walsh -- "Hole in the World" and "One Day at a Time." While other included solo works from Walsh, Frey and Henley are all familiar, these more recent songs seem out of place. I personally wish that more classic tunes like "James Dean" and "The Last Resort" had been included instead.

The horn section backing up the band brings an occasionally unwelcome jazzy haze to some songs, but for the most part makes the performance fuller and more lively. While there isn't anything played here that risks the structure of the classics, it also never feels boring or repetitive. Additionally, an abundance of guitar solos and riffs make the live show seem more spontaneous than it might have otherwise. Walsh is funny throughout and the other band members are gracious hosts to the audience, creating an atmosphere of a small coffee house performance. While former members Randy Meisner and Don Felder are absent, the lack of personal drama on stage makes their loss more than acceptable. Guitarist Steuart Smith fills in for Felder without missing a beat in his playing, but he's clearly (and obviously) removed from the other members.

All in all, I had a great time watching this breezy live performance that comes with almost everything you'd want in a late career show from a legendary band. Packed with hits, 'Eagles Farwell Tour I' is sure to reverberate with fans and might even bring some new listeners into the fold. 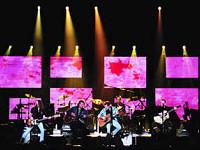 The first thing I look for in the picture on high-def concert discs is the lighting on the stage, as beams of light against the darkness allow for a whole series of quick evaluations of a disc's quality. Luckily, 'Eagles Farewell Tour I' doesn't disappoint. Presented in 1080p using the VC-1 codec, this HD DVD has a pristine source without any artifacting, problematic crush, or color banding. The contrast is striking and vibrant colors are steady throughout. While some of the lighting randomly flushes the faces of the musicians, this is a result of the stage show design and not the technical prowess of the transfer. The darkness and black levels are deep and add a three dimensional quality to the band that places it among other highly reviewed concerts.

The only downside for me is that the overall clarity of the picture is somewhat lacking. Skintones aren't very warm (even when the stage lights are more natural), hair and stubble detail is a bit soft, and the edges of the guitars against the darkness are slightly less sharp than would be ideal. Beyond this, shadow delineation seems artificially boosted in crowd shots. All things considered, these are minor nitpicks, and shouldn't stand in the way of Eagles fans enjoying this otherwise impressive high-definition presentation. 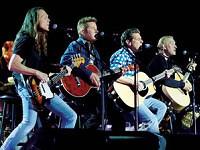 Finally we arrive at the single most important aspect of a concert presented in high-def -- the audio quality. 'Eagles Farewell Tour I' on HD DVD offers both a DTS 5.1 track and an uncompressed PCM stereo mix, but unfortunately both are a bit less than perfect. The stereo track has a much fuller sound (particuarly in the accompanying band and the resonating guitar solos), but pulls away any concert ambience, making it sound like a high quality audio CD rather a live show. On the opposite side of the coin, the DTS surround mix is more immersive and convincing, but has less of an impact when it comes to the music itself.

An uncompressed surround track would've been the ideal, but as is, I found myself flipping between the two formats to get the best of both worlds. While it was somewhat distracting, it did help me evaluate both tracks pretty thoroughly. To avoid confusion, I'll break the rest of this audio review down into two parts: the quality of the music itself (mainly using the uncompressed stereo track as reference) and the quality of the overall experience (mainly using the DTS surround mix as reference).

The music on the stereo track is a bold treat for the ears. The guitars are powerful and fill the concert with a solid foundation, the brass section harmonizes without wavering, and treble and bass fields are strong and well balanced. The drums pound through the noise and echo nicely in spite of the stereo presentation. The only downsides are the boosted synth runs which should have been pulled back a bit and a few instruments in the mini-orchestra being lost beneath fuller sounds when the concert kicks into high gear. The music on the surround track is impressive as well, but never manages the depth of instrumentation that the stereo mix boasts.

The experience of the concert itself is something of a letdown on the surround track and is nearly absent from the stereo mix. Crowd noise disappears during songs and as a result, the momentum of the live performance is lessened. However, the surround mix does do an effectove job of creating the illusion of music interacting with objects in space -- the audio quality is slightly muffled as the sound is absorbed by bodies, walls, and distance. When band members speak in between songs, the tone of the conversation is crisp and clear, rarely suffering from mumbling or the reverberations of the sound system in the stadium. Sadly, the band member voices sound flatter on the stereo track.

All in all, if you love listening to a good CD, check out the uncompressed stereo track because the songs and the instrumentation sound amazing. If you're a live concert fan, tap into the surround mix but brace yourself for a less-than-thrilling experience since the crowd noise has been almost completely excised. Either way, aurally speaking, this disc is a mixed bag that doesn't offer much of a middle ground for those of us who enjoy the full spectrum of a live concert experience. 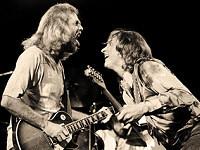 The only supplement on this HD DVD is an eleven minute Q&A with the members of the band. While it is filmed in high definition, the material is disappointingly shallow -- a longer documentary on the history of the band, their music, and their lives would've been much more fascinating.

A great live performance and a solid video presentation make this HD DVD presentation of 'Eagles Farewell Tour I' an easy recommend for fans of the band. For everyone else, this disc is hindered a bit by a mixed bag of audio options and lack of supplements. More casual fans and newcomers should probably rent this one before dropping too much cash into the experience.

Sale Price 48.79
Buy Now
3rd Party 48.79
In Stock.
See what people are saying about this story or others
See Comments in Forum
Previous Next
Pre-Orders
Tomorrow's latest releases