Overview - On New Year's Eve, the luxury ocean liner Poseidon capsizes after being swamped by a rogue tidal wave. The survivors are left to fight for survival as they attempt to escape the sinking ship.
OVERALL
Recommended

As movie genres go, the disaster movie has had a rocky history. Nearly disappearing ater its early-'70s heyday with blockbusters like 'The Towering Inferno' and the 'Airport' movies, it had a minor resurgence in the late '90s, with such destruction epics as 'Dante's Peak,' 'Daylight,' 'Armageddon,' 'Deep Impact' and, of course, 'Titanic,' scoring massive box office. But like a cinematic hula hoop, its resurgence proved short-lived, and by the time last year's long overdue remake of 1972's 'The Poseidon Adventure' hit theaters, the already soggy formula was completely waterlogged. Though a remake of the camp classic must have seemed like a sure thing on paper -- throw a bunch of B-list celebrities, one rising star, and a huge amount of CGI onto a luxury ocean liner, then sink it spectacularly -- it turned out to be such a money-sucker for Warner that it was quickly dubbed the summer's biggest disappointment. Glub, glub, glub.

'Poseidon' takes the basic premise of the original flick, only streamlines it to such an extent that I don't think a plot synopsis is even possible. It is literally comprised of about ten minutes of "Love Boat"-style exposition, followed by lots of shots of awe-struck passengers screaming, "The wave is coming!!!", and then 70 minutes of mindless destruction. If you look carefully, there are characters in there somewhere. See if you can spot Kurt Russell as overprotective daddy Robert Ramsey to Emmy Rossum's spoiled Jennifer, who may or may not be engaged to do-gooder Christian (Mike Vogel). Or Josh Lucas as the cocky ladies man Dylan Johns, who has apparently memorized the ship's entire layout, as he telepathically anticipates every impending calamity in the script. We also have Richard Dreyfuss as the suicidal architect, who seems to only be gay because he'd have no defining characteristic otherwise. And Andre Braugher as Bradford, the worst captain ever -- I truly admire his ability to sink an ocean liner in about three minutes flat. Some of these brave souls will live. Most will die. Of course, we know there will eventually be a rescue, followed by an end credit roll over a beautiful sunset, then the Brave New Tomorrow.

Okay, I'm mocking, but only out of love because I truly worship bad disaster movie cliches. As a kid, I would nearly hyperventilate every time I saw a movie poster with a row of boxes along the bottom, filled with has-been movie stars (George Kennedy! Ali MacGraw! Ernest Borgnine! Karen Black!), framed by either a giant swarm of bees, an exploding airplane, or an out-of-control roller coaster. Which is why 'Poseidon' is such a letdown. Here's a movie that should have been if not great, than at least vastly entertaining. Yet it makes the same fatal mistake that has plagued many modern disaster flicks -- it forgets its first 45 minutes. Imagine 'Titanic' if we never met Jack and Rose, or 'Deep Impact' if we didn't have to spend two interminable acts meeting all the people soon to be obliterated by a comet. We only care about the disaster if we care about the characters, and alas, 'Poseidon' doesn't have any (characters, that is).

I've heard that there was nearly an hour's worth of character development shot for 'Poseidon,' but that director Wolfgang Petersen eventually tossed it out of the final cut. And while that whittled the film down to a lean 98 minutes, it comes at a hefty price. Every character gets literally half a scene, and none of this paltry exposition will pay off. We didn't need the fabulous camp excesses of the original 'Poseidon Adventure' (although I personally would have loved it), but geesh, you gotta give us something to chew on. How about a little wife-swapping? A hooker with a heart of gold? A drag queen in love with a dwarf? Anything of substance would have sufficed. As impressive as the film's effects are, all the fiery elevator shafts, grand ballrooms half-submerged and truly exciting last-minute escape-and-rescues ultimately ring hollow when we can't even remember the character's names. In fact, I'm not even sure the film even bothers to tell us them in the first place.

Still, I can't say 'Poseidon' is completely worthless as entertainment. The movie cost something like a zillion dollars, and it shows -- the ocean liner is a feat of Hollywood ingenuity, with the sets, costumes and production design nothing short of flawless. Some of the death scenes do generate real suspense, because Petersen (who also helmed 'Das Boot' and 'The Perfect Storm') knows how to stage action effectively, and the flimsy characters are put through such physical agony it's hard not to feel for them. Even if 'Poseidon' ends up being just another slasher flick -- only with a wave instead of a serial killer -- it offers enough death and destruction that it delivers on the bottom line. Too bad it couldn't have been more. 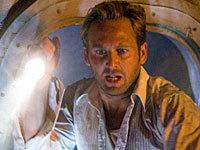 'Poseidon' hits HD DVD with considerable expectations, if only because we've had to wait so darn long for it to be released. The film hit standard-def DVD way back in August, with the high-def version held back until early December. Then that date was postponed to mid-January, which only increased excitement amongst early adopters looking for the next great piece of demo material. 'Poseidon' sure seems like the kind of film tailor-made for the home theater experience, and nothing short of brilliance would do. So, was it worth the wait?

I'm happy to report that this 2.40:1 widescreen 1080p/VC-1 transfer is indeed terrific for most of its length, and boasting some truly amazing moments. There is a sequence early on in the ship's big ballroom set, when Josh Lucas and a lady friend walk down a flight of stairs, and I am embarrassed to admit I went, "Whoa!" It's a set brimming with detail, which comes through wonderfully in high-def -- the gold accents shimmer, Lucas' eyes are an impossibly mesmerizing shade of blue, and the picture is so three-dimensional it is hard to imagine a video image looking any better. And for the majority of 'Poseidon's 98-minute runtime, that standard is maintained. The source is flawless, blacks terrific, and contrast nice and smooth across the entire grayscale. Detail remains vivid and sharp, from the bright daylight exteriors of the film's short expository scenes to the darkest interiors as the surviving passengers journey through hell. Colors remain vivid and stable throughout, especially the rich reds of such accents as emergency lights, and the deep, deep blues of all that water.

So, why I am holding back on a five-star video rating? Largely because I hate to use such an accolade unless a transfer is absolutely flawless. And 'Poseidon' does suffer from a bit of noisiness on very dark shots, and every now and again there is still a bit softness that flattens out depth. And oddly, the film's intial talky sequences may be the weakest, with colors looking a bit processed (especially the much-touted opening 360-degree intro of the ocean liner, which I thought looked phony). Yes, I'm being nitpicky, and five stars or not, 'Poseidon' is undoubtedly up there with the best transfers currently available on HD DVD. 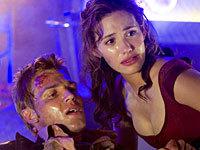 'Poseidon' hits HD DVD with a long-awaited Dolby TrueHD 5.1 surround track, and it is truly a knockout. While it's not as consistently engaging as 'Batman Begins' or (heaven help me) 'The Covenant,' it has moments of sonic brilliance that exceed anything I've ever heard on a next-gen release.

The scene that earns such gushing is the gangbusters tidal wave sequence that sinks the Poseidon. The wall of sound that emanated from all five speakers was massive. And it wasn't just the sheer loudness of it all, but the ability to discern minute details in the middle of it all. I kept scanning back to re-listen to the sequence again and again, just to revel in the crashing waves, the pops and crackles of explosions, and the screams of the passengers bouncing all around me. Yes, I'm a sick man, but mass Hollywood death in high-resolution is just fabulous.

Dynamics are also impeccable. The film's sound designers are the real stars of this show. Almost entirely constructed in the studio, every sound effect feels real and natural. Low bass is intense, and tight as a drum. Dialogue remains well-balanced throughout, even if we don't care what any of the charactera say. The generic but effective score is also nicely bled out to all channels, though it is usually concentrated more to the fronts. Granted, the rest of 'Poseidon' can't match the wave sequence, but who cares? It is a fantastic soundtrack, and I really can't imagine anyone being disappointed. 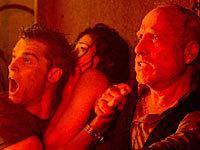 'Poseidon' on HD DVD replicates the extras found on the standard-def release, and it's an anemic batch of goodies that almost screams "double dip." Where's the oft-rumored extended cut? Or at least some deleted scenes? And how about at least a passing tribute to the original 'Poseidon Adventure,' not to mention Paul Gallico's original 1967 novel? Cheap, cheap, cheap.

With no commentary included, the making-of material is confined to three featurettes. Two are really about the same thing. "Poseidon: A Ship on a Soundstage" is a 22-minute ode to thespian masochism, as "game" actors battle fifty-foot waves, sets on gimbals that spin 360-degrees, and huddle next to playback monitors, marveling at the majesty of it all. I sure hope they were paid more than scale. "Poseidon: Upside Down" continues the filmmakers' love affair with mechanics, an almost masturbatory 10-minute look at the retrofitting of a real ocean liner used in the film. Finally, "A Shipmate's Diary" is a twelve-minute videocam assemblage created by film-school intern Malona Voigt. Unfortunately, I've seen much better stuff on YouTube.

Ironically, the best standard-def extra on the disc has nothing to do with the film, beyond its premise -- the 24-minute History Channel documentary "Rogue Waves." An interesting watch, if you've got the time.

Finally, we have the film's original Theatrical Trailer, which is kinda better than the movie. Note that all of the above materials were shot 16:9, but according to my video readout, are presented in 480p/i video only.

'Poseidon' is a fun flick which suffers because we just don't give a hoot about any of its characters. But no matter -- this HD DVD release looks and sounds fantastic, and the HD-exclusive "In-Movie Experience" is a true highlight. If nothing else, buy this one solely to show off your home theater -- it's the one level where 'Poseidon' absolutely does not sink.

Sale Price 12
Buy Now
3rd Party 10.2
In Stock.
See what people are saying about this story or others
See Comments in Forum
Previous Next
Pre-Orders
Tomorrow's latest releases