Overview - On Christmas Eve, a doubting boy boards a magical train that's headed to the North Pole and Santa Claus's home.
OVERALL
Worth a Look 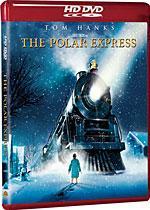 I have to admit that at first I was scared to see 'The Polar Express.' Between its images of a seemingly mummified Tom Hanks and all these little computer-generated tykes with their pasty faces and zombie eyes, the trailer quite honestly made it look less like a heartwarming family film and more like some sort of North Pole of the Damned.

But lo and behold, when the family finally dragged me out to see the flick a couple of years ago, somehow I survived the experience without suffering post-traumatic stress disorder. Though I can't say I found the film as "wondrous" and "dazzling" as its marketing promised, after a while the film's motion control capture CGI began to blur into abstraction and I was ultimately able to immerse myself in the story. Still, 'The Polar Express' remains a film that's constantly in danger of its visual style overwhelming its subject matter, and the latter only barely ekes out a victory by film's end.

The story itself should be familiar to many, as it is based on the popular illustrated children's book of the same name by Chris Van Allsburg. Looking back, I suppose the book always had the makings of a classic Christmas movie stamped all over it -- simple, universal, full of exciting action-adventure setpieces, and what kid doesn't love Santa Claus? The story concerns itself with "Hero Boy" (Tom Hanks, performing one of six different roles), a little Scrooge-in-the-making who has no use for Santa Claus and pre-sold holiday cheer. But then, on the night before Christmas, a mysterious locomotive pulls up in front of Hero Boy's house. Driven by the mysterious Conductor (Hanks again), the train whisks Hero Boy and a dozen other young travelers away on the journey of a lifetime. Overcoming all manner of thrills and spills on their way to the North Pole, ultimately our little Doubting Thomas will come face-to-face with Saint Nick, and will at last learn the true meaning of Christmas.

I'll be the first to admit that I'm not the film's target audience, but I'm also not immune to the powers of such fare. Unfortunately, 'The Polar Express' failed to cast a spell on me personally. Although the story itself may be enduring, taken in the context of a million other Christmas movies, it's a bit of a shopworn cliche. In fact, arguably the only thing truly "new" about the film is its technology, and like all effects-driven movies the shelf life of this stuff is short.

Even worse, ultimately the film fails to deliver where so many other modern flicks of its sort excel. Without giving away of the film's secrets, the moral of the story more or less boils down to the idea that Christmas rocks because you get presents. Forgive me, but I expected something a bit deeper. What about the value of selflessness? Sharing? Caring? Giving without receiving? Quite frankly, the morose, self-involved little brats riding 'The Polar Express' deserved to spend their Christmas Day working in a soup kitchen, not walking away with a new iPod.

All cynicism aside, 'The Polar Express' is certainly still a fun ride. Though nothing in a home theater environment will rival seeing the film in IMAX 3-D, it's hard to imagine kids not enjoying the spectacle of this film. The train-as-rollercoaster-scene, the slide ride at the North Pole present factory and the big finale are all thrilling sequences, and overall the film's visuals are a sight to behold. Though I found 'The Polar Express' emotionally hollow, I can't say I didn't enjoy taking in the sheer majesty of its technical achievement. 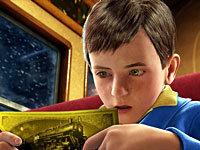 The advertising campaign for 'The Polar Express' focused heavily on the film's pioneering animation, much to the exclusion of everything else. Created entirely in the computer realm, the actors where photographed using motion-control technology, which produced the most photo-realistic humans ever seen in an all-CGI feature. I personally find the technique quite unsettling, as everyone looks ghost-like and zombie-fied, with hollowed eyes and weird, ethereal movements. But apparently many others love this stuff.

However, technically, 'The Polar Express' is a beautiful-looking film. It certainly was magnificent when I saw it in IMAX 3-D a couple of years ago. Though the previous standard-def DVD was a very solid effort, it is pretty hard to match the IMAX experience. But now we have this HD DVD release, which definitely takes us one step closer. If nothing else, this is likely the best this film will ever look outside of a gargantuan, 50-foot-plus IMAX screen.

Presented in 1080p/VC-1 video and the film's original 2.40:1 aspect ratio, 'The Polar Express' is visually captivating for its entire 100-minute runtime. As a direct-to-digital transfer, of course the source material is absolutely flawless. Physical imperfections such as dropouts, blemishes, dirt and grain just don't exist in this world. And since every last pixel of the picture was created entirely in a computer, the image has that impossibly stable and consistent look that only animated features can have.

That said, the transfer has a somewhat misty sheen to it that is entirely intentional. This may not be absolutely razor-sharp like some other animated features, but it faithfully replicates both of the theatrical showings of the film I saw. And make no mistake, it is a very sharp, detailed picture. Depth is often exquisite, with even the most minute image details apparent, from texture on snowflakes in wide shots to the finely-crafted buildings and landscapes of the North Pole. Texture, too, is often extraordinary for a CGI-animated film. The various clothing, such as the felt and fur of Santa's suit, are amazingly life-like and realistic.

If I have any hesitation in giving this one top marks, it is because I tend to prefer colors that are not too pumped up. 'The Polar Express' teeters on the brink of being oversaturated. However, I saw no chroma noise or bleeding even on the toughest hues, such as the rich reds of Santa's outfit. The majority of the film also boasts incredibly rich "fleshtones," as oranges bath the characters in an almost heavenly glow. I also admired the rich blue-purples of the nighttime scenes, and the the film's third act at the North Pole is flush with a wide palette of gorgeous primary colors. 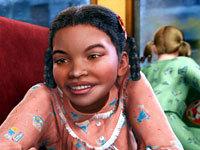 Alas, Warner has produced no new Dolby TrueHD mix for 'The Polar Express.' It is the only real disappointment on an otherwise strong disc, as this film's soundtrack is a complete artificial construction from the ground-up and is a real stunner. Like the image, here is a movie that never sounds a false note, and some of the more exciting setpieces deliver the kind of enveloping, 360-degree sonic experience tailor-made to show off a home theater.

That said, the Dolby Digital-Plus 5.1 surround track (encoded at 640kbps) that we do get is quite good. Though not a monumental upgrade over the standard Dolby Digital track on the previous DVD, the soundfield is a bit more open and spacious. The rear channels are particularly impressive with subtle and discrete sounds. I was often amazed at how life-like and immersive the various train sounds felt, whether the humming metal or the puff-puff-puff of its steam engine. A couple of sequences really stand out, noticeably the train-as-rollercoaster crash, and the kids sliding through the chutes of the toy factory. Imaging here is fabulous, and I felt surrounded by a near wall-of-sound almost constantly. Really fun stuff.

Technical aspects of the mix are also excellent. Dynamic range and low-bass extension impress, with the chugging of the train a particular highlight. Alan Silvestri's score is also very nicely balanced throughout the film, and especially fills out the front speakers to great effect. The film's somewhat eerie dialogue (sorry, the voices of the characters are just as creepy as their faces) is always front and center in the mix, and I never once had to do any volume adjustment to compensate. 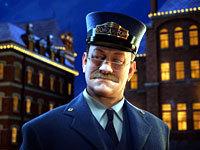 Is this a trend? All of Warner's big A-list HD DVD releases streeting this week (including 'Batman Begins' and 'Charlie and the Chocolate Factory') lack audio commentary tracks. 'The Polar Express' doesn't break that streak, and the entire supplement package rests on the shoulders of a series of short featurettes that are largely technical in nature.

The heart of the making-of material focuses exclusively on the film's motion-control capture technology. "You Look Familiar" shows Tom Hanks wearing a funny suit with little pinpoints on it, so his movements could be inputted into a computer. Hanks also had to act with himself, as he played most of the roles in the movie. I know some people find the actor annoying, but this featurette certainly showcases his considerable talents. This couldn't have been easy.

"A Genuine Ticket to Ride" is really a five-part breakdown of the production of the film's effects. Hosted by uber-geek Eddie Deezen (a long-time Robert Zemeckis regular, though he's perhaps best known for having been in 'Grease'), it is informative if sometimes dry, and personally, a little of this stuff goes a long way for me. I would have liked to heard more about the film's themes and story, but whatever. The five categories covered are: Performance Capture," "Virtual Camera," "Hair and Wardrobe," "Creating the North Pole" and "Music."

"True Inspirations," then, is refreshing, a 14-minute visit with author Chris Van Allsburg. As well as 'The Polar Express,' he also created the worlds for 'Jumanji' and 'Zathura,' and he seems to be a man of heart and character. After all the technical mumbo-jumbo, it is refreshing to watch something about 'The Polar Express' that is actually about real human beings. Somewhat ironic, no?

Rounding out the extras are some odds and ends. "Josh Groban at the Greek" is an encore performance by the famous singer of the film's closing song. A bit too syrupy for me. "Meet the Snow Angels" is nice featurette that collects various cast and crew reflections on their favorite holiday experiences. Sweet and good natured. Finally, there is also a half-unfinished deleted song, "Smokey and the Steamer." A mix of animated footage, storyboards and animatics, the late Michael Jeter sang both of the song's vocal parts, and it is a pretty good tune, though nothing that wasn't wisely cut.

Last but not least, we have an interactive game for the kiddies, "'The Polar Express' Challenge," and the film's theatrical trailer presented in 1080i video and Dolby Digital-Plus 5.1 surround.

'The Polar Express' tries with every last fiber of its being to be a new perennial holiday classic. I found the film to be a bit too emotionally distant and flat to truly succeed at that lofty goal, but whatever the case, it's visually spectacular. This HD DVD is a fairly solid release from Warner, with a great transfer and all of the same supplements as the two-disc DVD version. Though I would have liked a Dolby TrueHD track and some exclusive HD content, I can't argue that this one doesn't offer great value for money.

Sale Price 18.79
Buy Now
3rd Party 18.79
In Stock.
See what people are saying about this story or others
See Comments in Forum
Previous Next
Pre-Orders
Tomorrow's latest releases