Overview - Buy a new outfit. Be a disco diva. Learn to fish. Take a chance. Travel. Laugh. Love. Sometimes all you need to start really living is a little shove in the right direction – and that’s just what Holly Kennedy gets. From the handsome, big-hearted love of her life. From a series of mysterious letters. And from gal pals who know that a friend in need is a friend in need of some laughs! Based on Cecelia Ahern’s joyful bestseller and boasting a top cast led by two-time Academy Award winner Hilary Swank and Gerard Butler (300), P.S. I Love You is your very own message full of fun, love, triumph and romance.
OVERALL
Give it a Rent 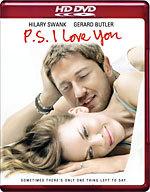 The old saying goes, "It is better to have loved andbl lost, than never to have loved at all." Try telling that to anyone who has suffered the premature death of a spouse, however, and you may get a different answer. There is perhaps no pain greater, and the emotional devastation can be so damaging that it's easy to understand why the one left behind would want to shut the door on love for good.

That's the central premise of 'P.S. I Love You,' a movie the marketing touted as a light romantic comedy but which is in fact far more somber than your usual entry in the chick-flick genre. Hilary Swank stars as Holly Kennedy, married to the hunky Gerry (Gerard Butler of '300,' sans CGI-enhanced chest). They're struggling, but their passion is as strong as their adverse circumstances. Then Gerry dies unexpectedly of a brain tumor at the age of 35, leaving Swank to pick up the pieces with the help of Gerry's widowed mother (Kathy Bates) and their circle of friends (including Gina Gershon, James Marsters, and Lisa Kudrow).

The hook of 'P.S. I Love You' is that Gerry had secretly written a series of notes and other instructions for Holly that are now appearing with regularity after his death. It's not supernatural, just whimsical (if still a bit credibility-straining), as Gerry directs Holly to let loose at a karaoke bar, take a pre-paid trip to Ireland etc. Holly's adventures will eventually lead to two potential suitors, a local bartender (Harry Connick, Jr.) as well an Irish pub singer (Jeffrey Dean Morgan), who bears a striking resemblance to Gerry.

The early scenes of 'P.S. I Love You' are the darkest of the film, but interestingly, the strongest. Swank is adept at conveying pain with subtlety, which brings a real sense of believability to the character that involves us in the story immediately, even after it quickly succumbs to a disorienting, jerky flashback structure that begins to irritate. It is here that the rhythms and pacing start to feel unnatural, to the point that we begin to expect yet another flashback to a grinning, philosophy-spewing Butler so regularly that it verges on the comical. (Director Richard LaGravanese also has an annoying tendency to try and pump up some thin scenes of drama by constantly cutting to close-ups -- back and forth, back and forth -- it's headache inducing).

Overlong at 127 minutes, 'P.S. I Love You' rambles a bit in its middle section. At the heart of the film is Holly's tug-of-war between holding on to her memories of Gerry, and choosing to love again with either Connick or Morgan. Unfortunately, what should have been a fairly compact story is unnecessarily stuffed with cutesy scenes of Holly falling off a stage during karaoke, fishing in Ireland etc. (all of which seem designed as money shots for the trailer). Thankfully, the third act quickly regains its footing, and is surprisingly effective -- again largely thanks to Swank's keen understanding of Holly's heartbreak. That I had a couple of tears by the end credits speaks to the story's basic power despite the film's flaws.

Ultimately, 'P.S. I Love You' is not an exemplary weepie, but having suffered through far more pedestrian entries in the romantic genre lately ('27 Dresses' comes to mind), it's boosted by a poignant core story and character, and a fine performance by Swank. If you're in the mood for a few laughs, a few tears, and some morose romance,' 'P.S. I Love You' is a note worth reading.

I didn't expect visual fireworks from 'P.S. I Love You,' but this 1080p/VC-1 transfer left me cold. Identical to the recent Blu-ray version, the film just looks strangely muted and oddly washed out.

As a new release, there's no problem with the source -- its clean (though there is a bit of persistent grain, which adds a film-like look). Unfortunately, blacks lack that rich, inky depth of the best transfers, giving a weirdly flat quality to the film. Colors also have some vibrant splashes, but are generally murky and lacking in purity. Detail is better, and richer scenes do have some dimension, but overall I just wasn't impressed with 'P.S. I Love You.'

Typical of a romantic comedy, 'P.S. I Love You' sounds front-heavy, with a Dolby TrueHD 5.1 Surround mix (48kHz/16-bit) that lacks distinction. (Also provided are French and Spanish Dolby Digital 5.1 Surround tracks at 640kbps, plus subtitles in English, Frencha and Spanish.)

Surrounds are meager, with even upbeat club and party scenes lacking zip. The film does make good use of a few melancholy pop songs, but even here there is little bleed to the rears. Thankfully, dynamic range has great pep, with some deep bass during a karaoke scene and a polished, clean sound. Dialogue is strong, too, and well placed front-and-center. It's just too bad that even for a romantic comedy, 'P.S. I Love You' is too restrained.

As with the Blu-ray, this HD DVD edition of 'P.S. I Love You' gets a pithy batch of supplements -- I guess the film's weak box office didn't exactly inspire Warner to cough up much dough for its high-def release. (Video is both 1080 and 480p/i resolution, and there are optional subtitles in English, French and Spanish.)

'P.S. I Love You' is a sensitive, often perceptive comedy, although one that takes one too many wrong story turns (not to mention it's way overlong at over two hours). This HD DVD is a bit of a disappointment -- I found the video lacking, the audio average, and the supplements a but understuffed. Makes a decent rental, though.