Overview - An exploration of the relationship between Elizabeth I and the adventurer Sir Walter Raleigh.
OVERALL
Worth A Look

In 1998, director Shekhar Kapur released 'Elizabeth,' his ornate and spectacular vision of the early reign of Queen Elizabeth I. The film may not have been a box office heavyweight, but it brought home Oscar gold and racked up plenty of critical favor, enough so that nearly ten years later, Kapur was able to film a sequel. 'Elizabeth: The Golden Age' reunites the original cast and picks up where the first film left off, this time focusing on the Queen's conflicted nature as England teeters on the verge of war.

By now, Elizabeth (Cate Blanchett) is no stranger to her enemies. Her imprisoned cousin Mary (Samantha Morton) is secretly plotting the Queen's assassination, King Philip II of Spain (Jordi Molla) is mounting a naval fleet capable of breaching the English coast, and extremists in her own country are more than willing to join in the mounting quarrel. As she holds to her convictions and tries to keep England safe, Elizabeth befriends a seafaring explorer, Sir Walter Raleigh (Clive Owen), who seems to take a liking to the Queen's company and not just to her position of power. As war looms and an assassin's bullet is always a breath away, Elizabeth must rely on her closest advisor (Geoffrey Rush) and a wise sage (David Threlfall) to help her make sense of her new challenges as Queen.

'The Golden Age' is a gorgeous period piece that faithfully recreates historical England, right down to the smallest cobblestone. The costumes are intricately designed, the sets look impossibly realistic, the details are simply staggering. Some critics have called the film slow, but I thought it moved along at a brisk pace for a historical character drama. The dialogue is succinct, the themes aren't repetitive, and we're given glimpses of a queen that is a logical extension of her younger self. Better still, the actors (particularly Blanchett, Rush, and Owen) seem to be giving their souls to the film, turning in performances that are worthy of nominations. However, the picture does have serious problems.

'The Golden Age' is by no means a bad film, it just seem to think it’s better than it actually is. At times, the film even borders on pretension -- for every intimate character exchange, there's a brash explosion of allegory and symbology, bordering on hubris. The last act is an exercise in banality, abandoning the historical narrative in favor of surreal imagery, allusions to spiritual conflicts, and slow motion shots that sweep over every scene. Some may argue that these moments are examples of Kapur's audacious style, but I feel they're simply the work on an overindulgent director. Indeed, some scenes both overstate their points and bring the momentum of 'The Golden Age' to a sudden halt.

It doesn't help that Kapur seems to be throwing random darts at a board covered in Elizabethan lore. Upon its release, the original 'Elizabeth' was the subject of some controversy, with various outlets pointing out historical inaccuracies made for the benefit of the narrative. In 'The Golden Age,' those historical liberties have been taken to a new level. Facts aren't merely altered, they're butchered to such a degree that 'The Golden Age' becomes far more fictitious than suits my taste. If a director is looking to make a fantastical morality tale with no resemblance to actual events, why use such infamous historical figures to do it? 'The Golden Age' is a historical farce that has no business being viewed as truth.

"Woman... Warrior... Queen” is the film’s tagline, and while we get plenty of Elizabeth the Woman, we don't see much of Elizabeth the Warrior or Queen. Her moments as a monarch merely make her seem out of control and on the verge of a breakdown -- as if they’re designed to make us feel empathy for her position in the court, rather than showing us her ability to lead. Her brief appearance as a horse-mounted armored warrior may lead viewers to assume the film is about to take an exciting turn, but alas, she simply gives a speech, retires to her tent, and waits (in her nightgown!) for the battle to reach its unforeseeable conclusion. Unlike 'Elizabeth,' 'The Golden Age' doesn't present a bold woman ascending to the throne; it presents a psychologically damaged woman who relies on everyone around her for decisions and support.

'Elizabeth' was an Oscar winning masterpiece of feminism and power, but 'The Golden Age' departs from everything that made the original great. If I didn't know better, I would guess that the two films had been helmed by entirely different directors. In the end, 'The Golden Age' doesn't have a lot going for it. If you view it as a companion piece to the original film, you may find some things to enjoy. Otherwise, prepare to be underwhelmed and disappointed. 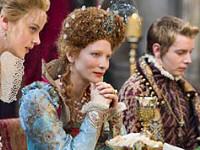 'Elizabeth: The Golden Age' arrives on HD DVD with an impressive 1080p/VC-1 transfer that renders it source with flawless detail. Costume textures, facial features, and background elements receive the full high-def upgrade and really make the transfer stunning at times. Skip to the scene in the Spanish shipyards or the naval battle at the end of the film -- note the woodwork, the ropes, the flashes of fire. These scenes not only showcase the meticulous work put into the film, they also highlight the strengths of this high-def transfer. To top it all off, vibrant colors provide a three dimensional quality to the image and I didn't catch a hint of artifacting, noise, or edge enhancement. There is some persistent banding present at random points in the presentation, but it's barely a distraction.

I do have one fairly big gripe. Black levels are consistently muddied by gold and milky tones that occasionally wash out the detail and depth of the picture. Shadows seem flat, and the image fails to pop in these instances -- for all intents and purposes, it seems like the transfer has a serious problem. However, dig deeper and you'll discover that this was an intentional change made to the image by Kapur in post production. That may be an interesting tidbit, but I initially assumed there was something very wrong with the display. If not for this strange anomaly, the transfer would have netted five stars from me.

All in all, 'The Golden Age' still looks very good and lives up to its potential in several key scenes. Compared to the DVD transfer on the reverse side of the disc, the HD DVD transfer is a godsend. It may not be the reference quality title I had hoped for, but it handles Kapur's vision with relative ease and delivers a fantastic, crisp rendition of historical England. 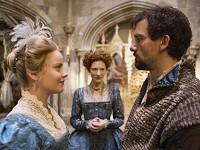 The audio package fares much better. 'Elizabeth: The Golden Age' features an active Dolby TrueHD 5.1 surround track (2.3 Mbps) that relies on the strength of its dynamics above all else. Low-end LFE support pounds throughout the track while dialogue and orchestral music remain clean and stable. The aforementioned naval battle includes a thundering storm, canon fire, colliding ships, and breaking waves -- a gamut of forceful sounds that are distributed perfectly across all the channels. Rear support and ambiance are noteworthy as well, opening up the soundfield and providing a palpable sense of spatial relation. This track definitely recreates the theatrical experience in your home theater.

If I have any minor nitpick it's that several lines of dialogue are painfully difficult to hear. When the Queen whispers in distress, I found myself reaching for the remote and tapping rewind just to catch her words. Thankfully, this prioritization mishap only occurs a handful of times and doesn't overly detract from the otherwise extraordinary audio experience. 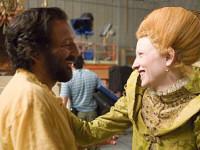 The HD DVD edition of 'Elizabeth: The Golden Age' includes all of the standard definition supplements from the DVD. To my relief, the featurettes are far more thorough than the short, EPK fluff included on the HD DVD release of the original 'Elizabeth. 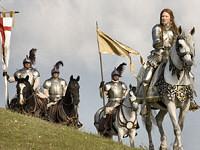 As a fan of the original, 'Elizabeth: The Golden Age' just didn't do it for me. It felt overindulgent, overstated, and it absolutely butchered historical facts. Luckily, the HD DVD boasts an excellent video transfer, a near-reference TrueHD audio track, and a nice collection of supplemental material. This one is definitely worth a look -- the film itself is the only thing that should make you approach this release with caution.

Sale Price 5.87
List Price 8.49
Buy Now
3rd Party 1.88
In Stock.
See what people are saying about this story or others
See Comments in Forum
Previous Next
Pre-Orders
Tomorrow's latest releases