Though it is not accurate to call the vigilante movie a genre unto itself like horror or the Western, ever since revenge became such popular and potent subject matter in 1970s American cinema (see 'Death Wish,' 'Dirty Harry,' 'Straw Dogs') filmmakers have never tired of churning out new spins on the once-taboo topic. Sure enough, every few years we get a new movie where a once law-abiding protagonist must resort to violence to ensure justice, usually after the murder or rape of a loved one. Though recent entries in the sub-genre including 'Mystic River,' 'Sleepers,' 'Revenge' and 'Eye for an Eye' have met with varying degrees of critical and commercial success, and none has achieved the kind of impact and notoriety of a 'Dirty Harry' or 'Death Wish,' there is still something alluring yet repulsive to our collective culture about the idea of taking the law into our own hands. When in doubt, give an ordinary guy a gun and watch the box office profits pile up.

'Four Brothers' hit theaters in early 2005, making it the latest vigilante flick to ring up fairly strong returns at the box office. It offers your typical revenge scenario: Evelyn Mercer (Fionnula Flanagan) is the closest the slums of Detroit ever got to a fairy godmother. Adopting four disadvantaged young boys of varying backgrounds and ethnicities (Mark Wahlberg, Tyrese Gibson, Andre Benjamin, Garrett Hedlund), she took nothing so her boys could have everything. But years later, after she is murdered in what looks like an anonymous convenience store robbery, the Mercer clan returns to their old haunt to pay their respects -- and seek justice. But all is not what it seems -- was Evelyn's murder just the result of a job gone robbed, or premeditated? And are the sons hiding secrets of their own?

'Four Brothers' certainly represents something of a career re-invigoration for John Singleton. The one-time whiz kid auteur (who, at 27 years old, became the youngest filmmaker ever to be nominated for a Best Director Oscar for 'Boyz 'N the Hood') has suffered a bit of a downturn as of late, with a string of critical disappointments ('Poetic Justice,' 'Higher Learning') and impersonal sellouts ('Shaft,' '2 Fast 2 Furious'). But 'Four Brothers' seems fueled by the same kind of passion Singleton displayed in 'Hood,' with intensely staged action sequences, a vibey use of classic tunes and some audacious visual panache. And for the first time he years, he seems to care about what happens to his characters -- 'Four Brothers' makes a genuine effort to explore the ramifications of its subject matter, more than merely exploit it for commercial viability. 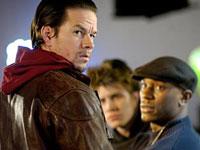 Still, I have to admit that 'Four Brothers' left me feeling a bit queasy. Vigilante movies are tough to pull off. -- there is a fine line between exploring the topic legitimately and glorifying its excesses. 'Four Brothers' seems to want to have it both ways. Singleton admirably shows the consequences as the once tight-knit bond between the Mercer sons begins to unravel and the situation starts to spiral out of control -- no one is left untouched, and the lies and deceptions run deep -- yet he also seems to be getting off on the primal appeal of street justice by staging the bloodshed like just another entertaining action movie. There is also a seemingly gratuitous homoerotic/homophobic interplay between the Mercer sons, while every female character is either a madonna or a whore, and the jarring lapses into comedy shtick betray the seriousness of the subject matter. Which makes it hard not to question the moral backbone of 'Four Brothers' and its makers. Once you use violence in the name of justice, no matter how noble the cause, it scars you irrevocably. And how many people have to die before the ends no longer justify the means? At the end of 'Four Brothers,' I wasn't sure if Singleton ever even entertained the possibility that such an idea could exist.

Presented in 2.35:1 widescreen and encoded at 1080p, this is another impressive Paramount HD DVD release. 'Four Brothers' has a more polished, crisp visual style than you might expect for an "urban" film, which results in a clean and professional transfer that actually looks a bit better than I expected.

Released theatrically in 2005, the source material here is in great shape, with no blemishes, dropouts or other artifacts. Blacks are deep and consistent even in the darkest scenes, and though there is some inherent grain visible it gives the transfer the appropriate film-like look. Contrast is rather natural and sharpness generally excellent as well. Also, though I thought the standard DVD release suffered from too much edge enhancement than is acceptable, this transfer is much smoother yet not too soft, which results is a fairly substantial upgrade in apparent depth -- how very nice to see. However, colors looked a tad bit too saturated for my taste, with some dark colors crushing down to a solid hue in the shadows, thereby reducing detail. Otherwise, color reproduction is well done with clean hues and no apparent noise or smearing. Overall, this is a very nice-looking presentation.

Presented in Dolby Digital-Plus (at 1.5mbps) and DTS 5.1 surround, both tracks are technically quite good. Alas, the sound design for 'Four Brothers' is rather lacking as far as I'm concerned, with little sense of envelopment or engagement -- quite a surprise for an action-esque movie like this.

Certainly, tech specs are up to snuff. Dynamic range is pleasing with solid reproduction across the entire frequency range. Though the Dolby Digital track on the original DVD release suffered a bit from poor high end and dull low bass, the DTS and especially the Dolby Digital-Plus do offer some improvement. High end especially is less harsh, and low frequencies kick in a bit more during the action sequences. Still, there just is not much going on in this mix -- even the extensive use of popular songs and the climactic showdown lack sonic excitement. Surround use is meager at best -- there is a bit of directionality with sound effects such as gunshots, but aside from the aforementioned rap song no inventive use of score or dialogue. When the rears are active imaging is solid, but with a mix this front heavy it can do little to muster up much in the way of envelopment.

Another direct port of extras from the current DVD release of the film, 'Four Brothers' contains the standard suite of supplements -- commentary, featurettes, deleted scenes and a trailer. But hey, if it ain't broken, don't fix it.

As director John Singleton says in his audio commentary, he wanted to make a "modern Western" with 'Four Brothers,' and it certainly invigorated his filmmaking juices. Alas, he is far from invigorated on this track, with a dull, listless delivery that betrays his enthusiasm for the movie. Luckily, he does impart a good deal of information on his intended themes and aesthetic decisions with the film, especially the casting of the Sofi character, which generated some controversy among reviewers as being a misogynistic caricature. Singleton does grows a bit more lively at the climax, describing how he staged the big showdown in a far-from-welcoming section of downtrodden Detroit, but this track is still likely be a slow, tough-going track unless you're a huge fan of the director.

Next up are a quartet of typical EPK-like featurettes: "Crafting 'Four Brothers'" (10:54), "Behind the Brotherhood" (9:29), "The Look of 'Four Brothers'" (10:05) and "Mercer House Shootout" (4:16). Not really a comprehensive overview, instead these featurettes focus in on key aspects of the production, namely the screenplay, cast, cinematography and the climactic action scene, respectively. All the material is culled from the same batch of behind-the-scenes footage and on-set/press junket interviews, but it is professionally shot and nicely edited. Like most Paramount making-ofs, this stuff is entertaining enough if largely forgettable once it's over.

The last of the main extras is a collection of nine Deleted Scenes, running almost 12 minutes. None are particularly interesting, with a couple of scenes coming off as even more misogynistic and homophobic than what ended up in the movie. The quality of these scenes is also poor, presented in fuzzy 480i video and with crummy sound to boot.

Rounding out the package is the film's theatrical trailer presented in full 1080p video.

'Four Brothers' is a fairly engaging revenge thriller, and it is certainly director John Singleton's strongest film in years. Paramount has crafted another quite respectable HD DVD release for the film, hitting a solid triple the board with good video and audio quality and decent extras. So this one is worth considering for purchase if you're a fan of the film, or definitely worth a rent if you're in the mood for a little ugly, grimy urban vigilantism.