Overview - Newly engaged, Ben Murphy (John Krasinski) and Sadie Jones (Mandy Moore) can't wait to start their life together and live happily ever after. The problem is that Sadie's family church, St. Augustine's, is run by Reverend Frank (Robin Williams), who won't bless Ben and Sadie's union until they pass his patented, "foolproof" marriage-prep course. Consisting of outrageous classes, outlandish homework assignments and some outright invasion of privacy, Reverend Frank's rigorous curriculum puts Ben and Sadie's relationship to the test. Forget happily ever after--do they even have what it takes to make it to the altar?
OVERALL
For Fans Only 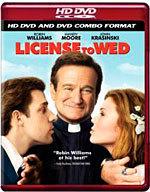 Anyone who's ever been to a wedding likely knows "that guy" -- the one who's loud, obnoxious and inebriated well before dessert. Inevitably, neither the bride nor the groom's side of the family will admit to inviting him, yet no wedding would be complete without him.

Promising in concept, 'License to Wed' is a comedy about that guy. Unfortunately, the film makes one truly fatal mistake, as the guy in question isn't just some random drunk, but is instead the bride and groom's priest. The result is a nightmare of such jaw-droppingly grotesque proportions that I don't think I've ever seen a mainstream Hollywood comedy so completely misunderstand the difference between edgy satire, and just plain ickiness.

The plot concerns itself with Rev. Frank Highland (Robin Williams), a one-man wrecking ball of marriage. Under the guise of promoting marital harmony, he aims to "lower the divorce rate" by busting up incompatible twosomes before the rice hits the ground. Falling prey to his perverse form of matrimonial bootcamp are Sadie Jones (Mandy Moore) and Ben Murphy (John Krasinski), who both are so eager to get hitched that they're rushing down the aisle in only three weeks, and will do anything Frank advises to ensure the approval of Sadie's conservative family. From giving up sex, to caring for two screaming, slobbering, creepy-looking robot babies, to forcing Sadie to drive through downtown Chicago blindfolded (don't ask), there's no challenge too bizarre -- or too humiliating -- that the Reverend won't subject them to in order to ensure the sanctimony of their union.

'License to Wed' is guilty of so many offenses that it's hard to know where to begin. It's readily apparent that the film seeks to combine the taboo-breaking vulgarity of a 'Wedding Crashers' with the the insightful family comedy of a 'Meet the Fockers,' but film's script, direction and performances never find the correct tone, and there is no real heart to the story. Instead, all we get is scene after unfunny scene of the Reverend humiliating poor Sadie and Ben with escalating forms of torture.

Not to take things too literally, but one can't help but question the sanity of every character in the movie. Why would an otherwise perfectly reasonable couple like Sadie and Ben submit to Frank's repeated intrusions? He berates them in church, spies on them in the bedroom, antagonizes them at family functions to instigate betrayal. If the film's characters had been drawn with any sort of complexity, perhaps 'License to Wed' might have been able to wring some truths out of such unpleasant situations. But every character is so one-dimensional that their behavior doesn't just ring false, it makes absolutely no sense.

As a result, the actors are left stranded. Moore and Krasinski are both extremely likable, but they can't save a script that would rather embarrass their characters than illuminate them. And though I don't wish to make light of Williams' much-publicized, recent declaration of alcohol addiction, his performance is so lazy and phoned-in that I have to wonder if he wasn't in rehab during the whole production. The supporting cast is equally wasted, from the underrated Christine Taylor as Sadie's beautiful but vapid sister, to little Josh Flitter as the "Choir Boy," the Reverend's even more destructive sidekick and one of the more unpleasant child characters seen in a recent movie.

On the surface, 'License to Wed' may seem like the perfect date-night rental, but I strongly urge you to resist the temptation. Suffering through even the nastiest divorce is preferable to enduring such a tepid and misguided comedy as this. 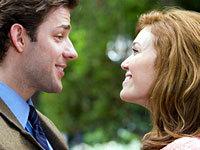 Well, at least the picture quality is good. Great, even. Boasting a 1080p/VC-1 encode (identical to the Blu-ray), this HD DVD edition of 'License to Wed' is another fine looking new release from Warner.

Typical of a fresh theatrical title, the source is absolutely pristine. Blacks have an inky, pleasing quality, and color reproduction is above average. Though the film is not overtly stylized, there are some very nice uses of color in the set design and costumes, from Sadie's strange obsession with wearing the color green, to the beautiful stained glass designs of Reverend Frank's church. Hues have a nicely saturated look without appearing fuzzy or noisy. Detail ranges from very good to exceptional, and the picture is sharp throughout. My only criticism is that contrast is a bit dull in the higher ends of the grayscale, which flattens out depth ever so slightly. Still, this is a minor nitpick. Overall, 'License to Wed' looks downright heavenly in 1080p.

Another casualty of "comedy soundtrack-itis," 'License to Wed' is typical of films where the subject matter apparently precludes any imaginative use of surround sound. Even with Warner providing a Dolby TrueHD 5.1 surround track (at 48kHz/24-bit), this sounds like a stereo mix and nothing more. (Note that the Blu-ray version includes a comparable PCM track, also at 48kHz/24-bit.)

Granted, 'License to Wed' isn't an action movie, but there are still some things that could have been benefited from some immersion. From the frequent scenes in the expansive church location (complete with gospel choir) to one very loud pair of animatronic twins, the mix cries out for some surround action, but alas we get none. At least tech specs are up to snuff, with pitch-perfect dialogue reproduction, and a pleasing, spacious sound to the complete frequency range. There are also no obvious defects to the elements, so on the bottom line this is a decent enough presentation -- it's just completely unmemorable. 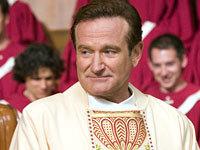 Given the failings of the film itself, I suppose it shouldn't surprise that Warner has produced scant few extras for the cross-format video premiere of 'License to Wed.'

The centerpiece of this package is a collection of five Deleted Scenes. Running about 13 minutes total, most are even more forgettable than the feature film itself. The "highlights" are an alternate opening with some poorly-executed animation, and an extended ending featuring Robin Williams and that smarmy choir boy kid. Both were wisely cut.

The "Ask Choir Boy" interactive game features the cherubic little brat actually doling out "relationship advice." Select one of the twelve questions, and it's followed by a simple clip of the character giving his answer on one of those call-in radio shows. Not funny at all.

Perfectly summing up the chintzy feel of this supplements package, Warner has not even bothered to include a theatrical trailer for 'License to Wed,' nor any other Warner Blu-ray titles.

'License to Wed' is an irritating and unfunny comedy that seems three times as long as its scant 91 minutes. Add to that a career-worst performance by Robin Williams, and you have one truly bad flick. As an HD DVD release, this one is slightly more respectable, boasting a strong video transfer and decent audio. Still, in all good conscience, I can't recommend this title unless you happen to be a huge fan of 'License to Wed.'

Sale Price 3.49
Buy Now
3rd Party 3.49
In Stock.
See what people are saying about this story or others
See Comments in Forum
Previous Next
Pre-Orders
Tomorrow's latest releases