Overview - Kevin Bacon and Fred Ward star as two country handymen who lead a cast of zany characters to safety in this exciting sci-fi creature comedy. Just as Val McKee (Bacon) and Earl Basset (Ward) decide to leave Perfection, Nevada, strange rumblings prevent their departure. With the help of a shapely seismology student (Finn Carter), they discover their desolate town is infested with gigantic man-eating creatures that live below the ground.The race is on to overcome these slimy subterraneans and find a way to higher ground, in this enjoyable thriller co-starring Michael Gross and Reba McEntire.
OVERALL
Worth a Look

Creature Features have been a staple of the horror genre ever since 'Dracula' and 'The Mummy' first graced the silver screen more than seventy-five years ago. In all that time, the rules of the successful subgenre have remained intact -- a group of flawed average Joes must face an inhuman opponent, suppress their fear, and wage war on the evil that threatens their survival.

'Tremors' is an early '90s horror/comedy about the residents of a small, dysfunctional Nevada town who band together to survive an attack from giant subterranean worms. The "Graboids" (as they're fondly nicknamed) hone in on the slightest vibrations and devour anyone foolish enough to take a heavy step in the wrong direction. Handymen Valentine McKee (Kevin Bacon) and Earl Bassett (Fred Ward) reluctantly team up with a seismologist (Rhonda LeBeck), a pair of gun-toting survivalists (Michael Gross and Reba McEntire), and other terrified townsfolk to bring an end to the Graboids reign of underground terror.

I remember watching 'Tremors' as a kid. More precisely, I remember wearing out an old VHS tape of the flick because I watched it almost every day after school. Fifteen years later, the tight script and fun-loving rabble-rousers who litter the story still had me laughing and smiling my way through to the end credits. I'll admit my love of the film may be driven in part by nostalgia, but I'd wager there's enough here for newcomers to love as well. The tongue-in-cheek jokes are genuinely amusing, the character banter is feisty and fresh, and the storyline doesn't suffer from annoying tangents and subplots. The actors go for broke and sell their characters -- Bacon and Ward set the tone, McEntire is a natural in her part, and Gross is a hilarious gift to the 'Tremors' universe.

Until recently, I hadn't seen 'Tremors' for years, and to be honest, I was worried that it wouldn't hold up after all this time. Thankfully, the backwards mining town at the center of the plot helps to keep the film from feeling dated. The characters are supposed to feel as if they're trapped in another time, hidden away from the progress of society. They're simple country folk who don't need classy clothes or the latest ride to impress their neighbors. As a result, the movie doesn't feel like it takes place in the '90s. More importantly, the creatures remain hidden underground for most of the film, but still look fairly convincing when they make an occasional appearance. The practical effects team did an excellent job with the mechanics of the worm models and I think modern CG would only hamper their believability. For the most part, I think director Ron Underwood ('City Slickers,' 'Mighty Joe Young') could've made this exact movie this year and it would've still received a positive reception.

That's not to say that 'Tremors' is the be-all, end-all of modern horror/comedy. While I appreciate the lack of an origin story for the creatures, the scenes where the film directly addresses the vague nature of the Graboids tend to feel more like an obvious wink at the audience rather than a legitimate plot point. To top it all off, some of the minor supporting actors give cringe worthy performances that seem too forced for their own good. I dig the campy tone of the flick, but I grew weary of the "country bumpkin" routine that's usually used to justify illogical reactions and moronic behavior in some of the characters.

All in all, 'Tremors' is the sort of film critics apologize for liking. Not me. This quick witted, entertaining romp is a true gem of the genre that unlikely to disappoint. It's not perfect and it certainly isn't an award winner, but it is a fun two hours of worm-sploding, shotgun-blaring, dynamite-cracking horror comedy that's well worth your time. 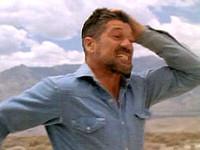 'Tremors' is presented with a 1080p/VC-1 encode which fixes many of the problems that plagued the original DVD -- gone are the aberrant colors, the oversaturated skintones, and the blocky shadows. The palette in this transfer retains the harsh contrast of the sun bleached desert, but allows the image to feel much more natural than it has in the past. It also helps that detail borders on the miraculous. I never expected to find the sort of texture clarity and fine rendering that's on display throughout the film. Take one look at the frayed ends of Kevin Bacon's hair, the fabric patterns in Michael Gross's hat, and the stubble littering the canyons of Fred Ward's weathered face -- the entire image is light years ahead of previous releases. There are a few blemishes and scratches inherent to the original print, but to my delight, the picture isn't hampered by any distracting source noise or artifacting.

So why the 3.5 video rating? Two words: edge enhancement.

Even fans with smaller displays will notice the persistent, thick halos that are strewn about most scenes. It's especially glaring during the second half of the film as our heroes trek across the desert. Every time one of the actors is framed against the bright sky, a visible outline makes them appear as if they've been digitally inserted into the frame. Since the rest of the film is as gorgeous as it is, the overindulgent EE is a real shame -- 'Tremors' could've been a visual contender. Instead, it merely offers a worthy visual upgrade that suffers severely from a dated DVD-era technique. 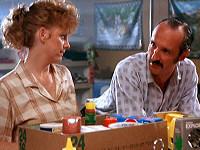 Thankfully the audio package has none of red herrings of the video transfer. 'Tremors' features a remarkable Dolby TrueHD 5.1 surround track (48 kHz/ 16-Bit/ 2.5 Mbps) that convincingly buried the film's creatures under the floor of my home theater. "Dynamics" was the first word I jotted down in my notes -- an aggressive LFE presence and a series of stable high end tones make every worm attack an audible delight. The ground rumbles with powerful bass pulses, the soundfield is pierced by other-worldly shrieks, and dialogue remains crisp and clear in spite of all the on-screen chaos. Best of all, this mix showcases transparent pans and pinpoint accuracy that combine to make it easy to track the position of the subterranean worms throughout the soundfield.

I'm also pleased to report that the surrounds are used to good effect. The rear channels bolster the acoustics of interior scenes and heighten the environmental ambiance of exterior shots. The film's pulpy music is properly spread across every channel and noticeably seeps into the surrounds during chase scenes. For a low budget film that's more than fifteen years old now, I expected to find many more problems and shortcomings with the integrity of the soundfield. As it stands, my only gripe is that some of the looped dialogue sticks out like a sore thumb. Still, overall, fans of 'Tremors' will be pleased to hear how well the film has made the transition to HD DVD -- it sounds as if it were recorded yesterday. 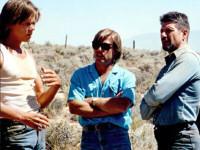 This HD DVD edition of 'Tremors' ports over all of the supplemental content from the standard DVD. Although I've always wished really there was a commentary track available for this one, the detail of the documentary is a decent second-best. 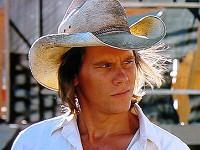 'Tremors' is a smart horror/comedy that manages to stand out from the crowd more than a decade after its original release. This HD DVD edition is certainly an upgrade over anything that's come before it, but it's far from perfect. The video transfer is quite strong in most respects, but is hindered by severe edge enhancement. Likewise, a complete port of the thin supplements package from the standard-def DVD is nothing to write home about. On the bright side, the TrueHD mix is one of the better audio tracks I've heard on a catalog title. All things considered, this one's definitely worth a look -- just set your expecatations accordingly.

Sale Price 6.08
Buy Now
3rd Party 2.1
In Stock.
See what people are saying about this story or others
See Comments in Forum
Previous Next
Pre-Orders
Tomorrow's latest releases