Overview - Get ready for the unrated and out-of-control version of Old School that you couldn't see in theaters! What's a guy supposed to do when he catches the early flight home and finds his girlfriend in a bed with a roomful of strangers? Return to college and start a fraternity! Before you can say "wild and wet wrestling", Frank "The Tank" (Will Ferrell, Saturday Night Live); Mitch (Luke Wilson, Legally Blonde) and Beanie (Vince Vaughn, Swingers) have their own frat raging with out-of-control antics. But when things get too wild, the dean sets out to shut them down. The laughs are top of the class (even if the guys aren't) in the hit comedy from director Todd Phillips (Road Trip).
OVERALL
Worth a Look 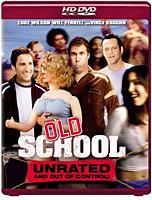 When 'National Lampoon's Animal House' premiered back in 1978, it instantly redefined big-screen comedy. Its blockbuster success led to a wave of collegiate-themed, low-budget quickies, all filled with beer-guzzling frat boys, sorority girls not shy about taking their tops off, and plenty of gross-out humor involving bodily functions. Even now, almost thirty years later, it's not hard to spot the lineage between 'Animal House' and everything from the spoog-in-the-hair antics of 'There's Something About Mary' to the self-mutilating shenanigans of the 'Jackass' movies.

But what so many of 'Animal House's imitators have failed to realize was that what made the film work was a combination of strengths that were far more than just an assemblage of dirty jokes. 'Animal House' certainly had the gross-out factor, but it also had a cast of lovable losers everyone could identify with, an abundance of truly inspired wit to balance out the over-the-top slapstick, and a fearlessly anarchistic attack on the oppressive values of bourgeois intellectualism. Genuine comedic smarts married with inspired outrageousness is a rare combination on the big screen, but 'Animal House' had it in spades.

'Old School' is a film that desperately wants to be the 'Animal House' of its generation. It's nowhere near as good, but it does get close enough to the same mix of inspired lunacy that it at least earns the comparison. 'Old School' has an approach to its humor that is perceptive yet absurd, and manages to make us care about the foibles of its characters where so many other films of is ilk don't even bother to try. It also happens to be a pretty darn funny film -- in fact, I probably haven't laughed this hard since the last time I watched 'Animal House' on high-def.

The plot of 'Old School' will certainly be familiar to anyone who has seen 'Animal House' or of the other college-set pictures that followed it. Mitch (Luke Wilson) has just lost his cheating girlfriend, and he's about to lose his house, too. So his married pals Frank "The Tank" (Will Ferrell) and Beanie (Vince Vaughn) hatch an inane plot. They'll turn Mitch's house into a fraternity, and get to relive their glory days of lost, inebriated youth all over again. But their plan works too well. Suddenly, the frat is the biggest on campus and the antics are wildly out-of-control, leaving the dean (Jeremy Piven) no choice but to shut them down.

Much of the credit for the success of 'Old School' should go to its young writer-director Todd Phillips ('Road Trip'). He's obviously studied 'Animal House' and other comedy classics of the era (such as 'The Blues Brothers' and 'Stripes') and realizes what made them so memorable. A movie is funnier when we actually like the characters, and even the silliest stories can offer enlightenment if we can recognize something of our own experience in their predicament. For all of its zaniness, 'Old School' doesn't shy away from painting its lead characters as the sad, pathetic men they are growing up to be. In fact, 'Old School' arguably draws as much inspiration from such mid-life crisis comedies as Blake Edwards' '10' as it does 'Animal House,' and by blending the two, Phillips manages to illuminate some painful human truths far beyond his own years.

It helps that Wilson, Ferrell and Vaughn deliver some of the best comedic performances of their career. That they can do the gags is no surprise, but each also finds a believable center to their character that makes them well-defined and three-dimensional. Ferrell in particular is not only go-for-broke in his manic energy, but here hints for the first time at the more serious side of his personality that he would explore in such recent films as 'Stranger Than Fiction.' The inspired pathos in his portrayal of the aging Frank gives 'Old School' a surprising weight.

None of this is to say that 'Old School' is a masterpiece of human drama. Make no mistake, this a low-brow comedy first and foremost. In fact, Phillips is so concerned with keeping the gross-out gags flying fast and furious that at times his desire to please reeks of desperation. Still, purely on the level of unapologetic dumb-ass humor, 'Old School' had me laughing so hard that I thought I might pee my pants. 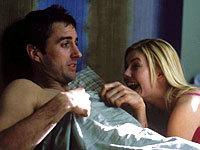 'Old School' originally hit home video at a time when the studios were just beginning to archive new titles in high-def en masse, in anticipation of coming formats like HD DVD. As such, this 1080p/AVC MPEG-4 encode from DreamWorks appears to have been struck from the same master as the previous DVD released back in 2003. But that's not a bad thing, as that earlier transfer was a solid one, and there is a noticeable (if not gargantuan) upgrade in terms of clarity and detail on the high-def version.

I wouldn't call 'Old School' a particularly classy looking picture, but we have certainly come a long way from the vintage '70s look of low-budget studio comedies like 'Animal House.' 'Old School' has a bright and detailed look, with professional photography and a nice use of saturated color. Hues are consistently pleasing and firm, and fleshtones generally accurate. Contrast burns a bit hot at times, but doesn't flatten out colors or depth to much of a degree. Detail is quite good for what is otherwise a stylistically straightforward movie, with only some softness and a slight loss of texture in its darkest scenes. DreamWorks has also produced a very clean VC-1 encode, with the slick and smooth veneer that has become a trademark of the codec well in evidence.

In what's sure to disappoint some fans, 'Old School' is the latest in a series of HD DVD releases from DreamWorks to eschew high-res audio support. Having said that, this one probably wouldn't have benefited all that much from a Dolby TrueHD track or the like, as the film's sound design is hardly unique or inventive.

The Dolby Digital-Plus 5.1 Surround track (1.5mbps) we do get suffers from comedy-itis, which is to say that like most films in its genre, it's pretty much a stereo mix with a few discrete effects thrown in. Only a few boisterous party moments and the use of songs on the soundtrack benefit from any rear action, and most of the time I forgot the surround speakers were even activated. This is still a professionally recorded mix, however, and the cleanliness of dynamic range and the hefty bass left me pleasantly surprised. Dialogue is front and center as it should be, and only during a couple of the very loudest party scenes did the music and supporting effects seem a tad overpowering. Perfectly serviceable. 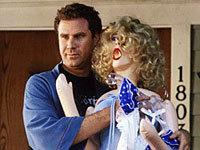 'Old School' hit standard DVD back in 2003 in several Unrated and Rated editions, each with a collection of supplements long on self-effacing comedy but short on substance. DreamWorks hasn't produced anything new for this HD DVD release, but we do get a complete port of that earlier package, presented here in standard-def only.

'Old School' is a gleefully tasteless collegiate comedy in the tradition of 'Animal House.' Though I didn't think it scaled quite the same sublime comedic heights of its '70s precursor, I did laugh louder and longer than I have for any other movie in recent memory. This HD DVD release from DreamWorks is also a winner, with a surprisingly strong transfer and a nice batch of extras as humorous as the film itself. The only real disappointment here is a Dolby Digital surround track that just doesn't cut it. Otherwise, 'Old School' easily makes the grade on high-def.

Sale Price 8.01
Buy Now
3rd Party 4.02
In Stock.
See what people are saying about this story or others
See Comments in Forum
Previous Next
Pre-Orders
Tomorrow's latest releases