Overview - On January 23, 2002, Mariane Pearl's world changed forever. Her husband Daniel, South Asia bureau chief for the Wall Street Journal, was researching a story on shoe bomber Richard Reid. The story drew them to Karachi where a go-between had promised access to an elusive source. As Danny left for the meeting, he told Mariane he might be late for dinner. He never returned. In the face of death, Danny's spirit of defiance and his unflinching belief in the power of journalism led Mariane to write about his disappearance, the intense effort to find him and his eventual murder in her memoir "A Mighty Heart: The Brave Life and Death of My Husband Danny Pearl." Six months pregnant when the ordeal began, she was carrying a son that Danny hoped to name Adam. She wrote the book to introduce Adam to the father he would never meet. Transcending religion, race and nationality, Mariane's courageous desire to rise above the bitterness and hatred that continues to plague this post 9/11 world, serves as the purest expression of the joy of life she and Danny shared.
OVERALL
Worth a Look

The tragic tale of kidnapped American journalist Daniel Pearl is likely familiar to anyone who followed news headlines in early 2002. Abducted by Pakistani militant fundamentalists while investigating possible links between Al-Qaeda and Pakistani Intelligence, Pearl was held for nine days while his captors relayed a series of demands to the United States. Although the US Department of Justice and the Diplomatic Security Service worked tirelessly to ascertain his location in an attempt to rescue him, on February 1, 2002, Pearl was killed.

Based on the memoirs of Pearl's wife, Marianne, ‘A Mighty Heart’ recounts her experience during those nine days in early 2002. When Daniel (Dan Futterman) goes missing during a trip to Pakistan, Marianne (Angelina Jolie) is swept up in a maelstrom investigation. Her residence becomes ground zero for every official trying to bring an end to this international crisis. Their living room is covered in notes, photographs, and diagrams -- constant reminders of her husband's peril and the ruthless men holding him. Struggling with the hope of rescue amidst the mounting probability of failure, Marianne remains resilient in the face of a short window of opportunity.

Although the structure of the film ultimately boils down to a familiar procedural, director Michael Winterbottom ('Welcome to Sarajevo,' 'Code 46,' 'Tristram Shandy: A Cock and Bull Story') infuses it with a startling level of realism. I felt chills when things went wrong and genuine frustration when information was just out of reach. Winterbottom’s actors fade away and leave actual human beings in their place -- even Jolie is stripped of her larger-than-life star status to deliver a down-to-earth main character. The film’s real-life origins may prove disturbing for some, but I was mesmerized by the immense tragedy of it all. By the time the story reaches its conclusion, I felt personally invested in (and devastated by) everything happening on the screen.

Be warned: a consequence of Winterbottom's naturalism is that the film is nearly crushed by an avalanche of information. The investigators' white boards are packed, and the conversations are thick with minute details. It makes the entirety of the story somewhat difficult follow during a first viewing, but that's the point. Winterbottom forces his audience to feel as confused and overwhelmed as his protagonist. In a sense, this potential handicap actually enhances the reality of the experience.

That's not to say that Winterbottom's film is without flaws. My chief gripe is that too much attention is given to the investigators, often shoving the Pearls themselves into the background of their own story. While an argument can be made for the shift, I wanted to remain focused on Marianne and Daniel instead of memorizing the details of the investigation’s last thrust.

All in all, 'A Mighty Heart' is a fascinating drama that was largely overlooked when it was released in theaters. It features amazing performances, a taut storyline, and a realistic examination of people in crisis. I really hope it finds a wider audience on home video. 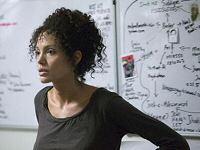 'A Mighty Heart' is presented on HD DVD in 1080p with the VC-1 codec. Unfortunately, while this release is faithful to its source, compared to other high definition releases, it's merely average.

Shot with HD digital cameras, the bleached palette and distorted look of the film’s original footage is a suitable match with the film’s many sequences of news footage from the actual events. Still, black levels can't resolve the darkest areas of the screen, softness creeps in throughout the production, and detail is generally lackluster. The biggest distraction comes in the form of fluctuating noise levels that frequently mar the image with unwanted texture. This not only flattens the image but it also obscures on-screen details like newspaper print and scrolling text on televisions in the background.

Thankfully, 'A Mighty Heart' doesn't suffer from the eyesores that plagued the recent release of '28 Days Later' (shot with the same directorial intent, but with SD cams). While this review will likely become a part of the ongoing debate of director's intent vs. video quality, it would be misleading to our readers if we rated 'A Mighty Heart' with the same score as other Paramount HD DVD releases like 'Transformers.' This transfer may be just as faithful, but it certainly doesn't give home theater enthusiasts the same visual bang for their buck. 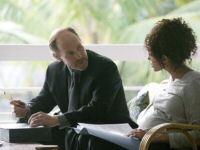 Although many bemoaned the lack of high-res audio on Paramount’s bombastic 'Transformers' HD DVD (which was released on the same day as ‘A Mighty Heart’), the studio has blessed this one with a Dolby TrueHD 5.1 surround track (48 kHz/16-Bit/3.46Mbps). Unfortunately while I’m not one to look a gift horse in the mouth, ’A Mighty Heart’ doesn't offer much in the audio department, making the addition of TrueHD in this case largely superfluous.

The track itself is certainly technically proficient and handles the limited soundfield of the film with grace. Dialogue is crisp, ambiance is abundant, and the soundscape is convincing. I was also pleased to find a careful attention to detail in the track's transparent pans and environmental acoustics. A few action-oriented scenes also demonstrate some potential with heavy bass and active surrounds, but these moments are few and far between, as this is a largely front heavy affair.

Overall, this TrueHD track handles everything it’s given with ease -- it just isn't given much in the first place. 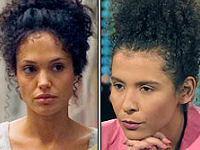 'A Might Heart' arrives on HD DVD with basically the same supplements that are included on the standard DVD. However, considering the sheer volume of archive footage and news coverage available of the actual events, I'm surprised there isn't more.

The meatiest extra is "Journey of Passion" (30 minutes), a documentary that looks at the behind-the-scenes efforts that brought this story to film. While it has the expected interviews with the cast and crew about the physical and emotional challenges of making 'A Mighty Heart,' unfortunately the real people upon whom the story is based are not featured prominently. Therefore, we wind up with a respectful but somewhat hollow glimpse at the film's history.

Next up is a look at the "Committee to Protect Journalists" (9 minutes), a foundation established to protect the rights of journalists around the world. This one reveals the vast number of journalists who've been killed over the years and explains how increased political pressure can prevent many such murders.

(Note that all of the video features listed above are presented in 480i/p video only.) 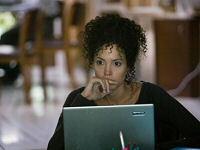 Based on actual events, 'A Mighty Heart' is a fascinating examination of love and loss. Unfortunately, as an HD DVD release, this gritty and quiet movie just doesn't get a lot of mileage out of its HD transfer or its TrueHD audio mix. Both are technically solid but they can’t compare with more impressive high definition releases. A slim supplemental package doesn't help matters. Make no mistake, this one’s still worth a look –- it’s just not likely to be the disc you use to show off the wonders of high-def disc.

Sale Price 0.99
Buy Now
3rd Party 1.49
In Stock.
See what people are saying about this story or others
See Comments in Forum
Previous Next
Pre-Orders
Tomorrow's latest releases