I did not want to see 'Seabiscuit.' I thought it would be either: a.) an update of 'Old Yeller' but with a horse; b.) the "inspirational" story of a jockey with a fatal illness; or c.) a movie about a snack cracker. Luckily, I was wrong on all three counts, and 'Seabiscuit' is none of those things. Rather, it is the kind of Movie-movie they don't make anymore, an unabashedly old-fashioned, romantic, feel-good entertainment that lifts the spirits and inspires the soul to sing. It is a simple story, well told, that earns its big emotions by being impeccably crafted, wonderfully acted and extraordinary photographed. Call me blindsided.

Based on the non-fiction book by Laura Hillenbrand, 'Seabiscuit' begins at the end of the great depression. Three men will begin to rebuild their lives from the shattered shards that remain: John “Red” Pollard (Tobey Maguire) an insecure young jockey, molded from hard times and coiled more tightly than his riding crop; Tom Smith (Chris Cooper) is the “horse whisperer” with an almost supernatural ability to communicate with his charges; and Charles Howard (Jeff Bridges) is a bankrupted entrepreneur who sees a thoroughbred in Red and will take him under his wing. Bringing all three together is a rather pathetic horse named Seabiscuit, who somehow inspires the men to attempt the impossible -- to take him all the way to the top. Along the way, the team's indefatigable spirit and ultimate triumph will rejuvenate the hope and optimism of a nation bruised and battered by the hardships of the Depression.

'Seabiscuit' is a love letter to the American Dream. It is corny, even maudlin, and many of its stylistic conceits -- the sun-drenched widescreen vistas, Ken Burns-like documentary narration and baroque score -- seem like something out of a '40s potboiler, hopelessly antiquated in this day and age of postmodern irony and hipness. But 'Seabiscuit' is the kind of film that doesn't just reject cynicism, it pummels it into the ground with all of the fury of a wild steed. It borders on fantasy, with an unwavering belief in the power of positive thinking -- nothing in this world is impossible, as long as you have enough idealism, gumption and dedication to will it into existence. If it leaves a slightly bittersweet aftertaste of treacle in its wake, well, even positivity doesn't come without a cost.

Forming the core of this decidedly boy's tale are Maguire, Bridges and Cooper. I have not been a particular fan of Maguire's blank-stare school of acting in the past, though admittedly here his stoic demeanor suits the insecurity of the character just fine, and he manages to express great nuance through subtle facial gestures and body language. Bridges and Cooper are typically terrific -- has either ever given a bad performance? -- and William H. Macy delivers another finely-etched supporting turn in a small role as announcer "Tick Tock" McGlaughlin.

Equally as impressive are the film's production values. 'Seabiscuit' is a beauty to watch, the gorgeous photography by John Schwartzman the equivalent of gold-plated celluloid. Schwartzman makes sure every shot drips with nostalgia, yet the film has a palpable sense of reality that maintains our suspension of disbelief -- his work is truly sublime. Also thunderous is the film's excellent sound design, and its horse racing sequences are as viscerally thrilling as anything seen in a 'Star Wars' flick. And director Gary Ross (Pleasantville) brings all of the elements together with expert pacing -- 'Seabiscuit' is the rare movie that at 141-minutes, feels too short. Even if you hate horses, sports movies and Depression-era tales (like me), 'Seabiscuit' just may win you over.

'Seabiscuit' looked quite lovely in standard-def on DVD, but the film always seemed to be crying out for the high-resolution of HD to show off its true colors. Thankfully, Universal has delivered, with a wonderful upgrade that ranks up there with my favorite HD DVD transfers I've seen so far.

Presented in 1080p/VC-1 video, 'Seabiscuit' looks exquisite. The source material is pristine, with perfect blacks and excellent contrast that is consistent across the entire grayscale. Color reproduction is also wonderful, and even more vibrant than the already-lush standard-def transfer. Director of photography John Schwartzman ladles on the golden highlights, which imbues the transfer with a richness unusual in a modern movie. Unlike today's tweaked-up transfers, 'Seabiscuit' looks realistic and natural, with some appropriate film grain visible (mostly in darker scenes). And it is most welcome.

The level of depth and detail also handedly trumps the standard DVD presentation. For example, there is a sequence early on where Chris Cooper watches Seabiscuit on a very foggy, overcast evening, but despite all the gloom the HD version never looked anything less than three-dimensional. Also gone are some of the minor moire patterns that hampered the standard-def release -- this time out, I couldn't detect any visible noise or compression artifacts. I'd like to find something to complain about here, but 'Seabiscuit' is just about damn flawless.

Alas, Universal has not sprung for a new Dolby TrueHD track for 'Seabiscuit,' which is the only relative disappointment of an otherwise stellar disc. However, we do get a Dolby Digital-Plus track encoded at 1.5Mbps that certainly delivers the goods.

The sound design of 'Seabiscuit' clearly favors the horse racing sequences, and they gallop ahead at full steed. Surround use is aggressive during these sequences, with expertly-crafted sound effects that never feel less than authentic. Crowd noise and stampeding hooves in the rears merge to create a very effective 360-degree soundfield, and imaging is just about transparent. Also getting more of a workout on the Dolby Digital-Plus track is the .1 LFE, which pumps out some mean bass when called upon. Granted, quieter scenes in 'Seabiscuit' pale somewhat by comparison, with only minor atmospheric sounds and sporadic bursts of Randy Newman's score audible. But aside from the inclusion of a Dolby TrueHD track, it is hard to imagine 'Seabiscuit' sound any better.

Universal had ponied up for a very nice package of supplements on the previous three DVD editions of 'Seabiscuit' (separate full frame and widescreen versions, plus a limited two-disc set), and has ported over the whole batch here. Man, these feature-packed HD DVD sets are just getting better and better everyday!

One of this disc's many highlights is a screen-specific audio commentary with director Gary Ross and Steven Soderbergh (anyone wondering what the connection might be, Soderbergh was a producer on Ross' first film, 'Pleasantville'). This track is great fun but also quite informative, with Soderbergh grilling Ross on all facets of filmmaking, from developing an authentic script based on true-life events, to casting, to working with animals (over ten different horses were drafted in to play Seabiscuit), and managing the various departments as the film raced through post-production. This is exactly the sort of commentary that reminds you why they have remained such a popular feature on laserdisc, DVD and now the next-gen formats .I certainly can't imagine any fan of this film being disappointed.

Next up are three featurettes which are a little more hit or miss. The 15-minute "Bringing the Legend to Life: The Making of Seabiscuit" suffers from that common calamity of DVDs, a reliance on production or EPK interviews. This Laurent Bouzereau-produced piece is certainly more than watchable, with contributions from all of the film's principals, including Ross, Tobey Maguire, Jeff Bridges, Chris Cooper and Laura Hillenbrand, the author of "Seabiscuit: An American Legend." Alas, with such a thrifty runtime this one is just too short, and only Ross is given enough time to really go in-depth.

The other two featurettes, "Anatomy of a Movie Moment" and "Seabiscuit: Racing Through History" also run a tad short at 15 minutes each, but at least are more unique than "The Making of 'Seabiscuit.'" "Anatomy of a Movie Moment" is primarily a one-one-one interview with Ross, where he guides us through two key scenes via his annotated script notes. This is a short but strong presentation, as Ross is very clear about how he sets up shots, chooses angles and films action. "Racing Through History," meanwhile, provides much-needed historical context to increase our understanding and appreciation for the film. Ross again narrates, and this informative recap includes archival footage and extensive stills -- no surprise since the real Seabiscuit was the biggest star of his day, generate more ink and coverage than any human or animal figure of the time.

The last major extra is an above-average still gallery, "Photo Finish: Jeff Bridges’ On-The-Set Photographs." Bridges is fast becoming known as a very skilled and prolific photographer, documenting all of the films he works on. Here we get a great collection of some very creative and innovative shots he took throughout the making of 'Seabiscuit,' and the gallery is accompanied by very nice underscore and rare audio recordings. 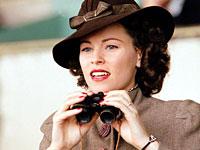 Though this HD DVD package drops the deluxe packaging of the two-disc Limited Edition DVD (including a very spiffy 30-page booklet and other collectibles), it does include all of the main video-based extras from that set. Unfortunately, they are a mixed bag.

The half-hour "HBO First Look Special" is exactly what you would expect. It is more of an expanded version of "The Making of 'Seabiscuit'" featurette already included, although it runs longer at 24 minutes and overall is slightly more satisfying. Better are the historical featurettes "Winners' Circle: The Heroes Behind the Legend" and "The True Story of Seabiscuit." Along with "Racing Through History," these provide key historical insights, although they are best watched after the main feature -- I found it best to let Maguire, Cooper and Bridges be my first images of these real-life characters, rather than vice versa. Regardless, 'Seabiscuit' fans and historical buffs will be most enticed by these extras, though casual renters probably won't care too much.

Rounding out this extensive package is rare archival footage of the actual "1938 Match Race," featuring Seabiscuit trouncing his competition. Quite fascinating to watch. Go, Seabiscuit, go!

No exclusive HD extras on 'Seabiscuit,' but given the wealth of standard-def extras this set is still overflowing with good stuff.

'Seabiscuit' is a real surprise for me. It is a film that I thought I would hate about a subject I could care less about, yet still I was won over. Equally as hypnotic is this HD DVD, which is another standout from Universal. A terrific HD transfer, excellent soundtrack and supplement package worthy of the Kentucky Derby make this one a no-brainer, even if you already own the standard-def release.