'Rumor Has It...' may not be a catastrophe on the scale of cinema's biggest boondoggles, but it is certainly one of Hollywood's most high-profile misfires of recent years. A sort of pseudo-sequel to the 1967 classic 'The Graduate,' the film's screenplay (by Ted Griffin) had been kicking around for a number of years and come to be regarded as one of Hollywood's great unproduced scripts, with even Dustin Hoffman and Anne Bancroft briefly attached to the film in its early stages of development. Still, despite the esteemed status 'The Graduate' continues to hold in pop culture, it wasn't until last year that Griffin was finally hired (and quickly fired) as director, before helmer Rob Reiner stepped in and attracted big stars Jennifer Aniston, Kevin Costner and Shirley MacLaine to the project. Despite all the bad buzz, the film seemed like it might actually surmount its troubled gestation given the talent involved, and Warner positioned the film to be its big holiday romantic comedy smash of 2005 -- almost forty years to the month of the original release of 'The Graduate.'

Unfortunately, then everyone saw the film. Trashed by critics and ignored by audiences, even some of the film's own stars refused to publicize it. Word soon got out that 'Rumor Has It...' was an unmitigated disaster, and ultimately it grossed a respectable if hardly hit-worthy $43 million at the box office -- especially considering its reported $70 million production budget. Even Aniston has since lashed out at the film, calling it "the worst film, the worst experience" of her career. Ouch.

Arguably, 'Rumor Has It...' is a strange concept for a film. Neither remake, reimagining nor sequel, it is a sort of "what if" wish-fulfillment story of what might have happened to the people who served as the real-life inspiration for the fictional characters in 'The Graduate.' (If you understand that last sentence at all, you deserve an "A+" in Post-Modernism 101.) Here's the pitch: Aniston plays obituary writer Sarah Huttinger, who's engaged to Jeff Daly (Mark Ruffalo), but she's commitment-phobic and beginning to get cold feet. Then during a trip to visit her grandma Katharine (Shirley MacLaine), Sarah discovers that her deceased mother once had an affair with Beau Burroughs (Kevin Costner) -- and who, it turns out, was the inspiration for the book and movie of 'The Graduate.' (Are you following this?) Of course, runaway would-be bride Sarah soon develops a crush on Beau, and she is torn between finally taking her stroll down the aisle with Jeff, or repeating history all over again just to the strains of Simon & Garfunkel. I wish I could come up with some sort of "Plastics" reference to cleverly wrap-up this plot synopsis, but I just can't think of one.

Much to my surprise, 'Rumor Has It...' is not as bad as I had expected. That's not to say it is very good, but given its lousy reputation, I was expecting another 'Ishtar' or 'Heaven's Gate.' Unfortunately, it is not an epic catastrophe so much as it is just poorly conceived and weakly acted. Just about everyone on the screen appears lost, bored or even more confused than the audience. It is just hard to fathom what attracted Aniston, Costner and Reiner to this material. Sure, I love 'The Graduate' as much as anyone else, but the concept of Aniston as the long-lost daughter of the real-life inspiration for Katharine Ross in the original film, who must relive the events of the film in order to overcome her commitment issues, is simply bizarre. And Aniston certainly looks dismissive throughout, as if she suddenly realized what she signed on for halfway through the shoot and wanted nothing but to escape. Say what you want about Aniston, but she can be a fine comedic actress, but here she looks like a deer caught in the headlights, reduced to a series of annoying hair-tugging and lip-biting tic. This is easily her worst performance ever -- on any size screen. 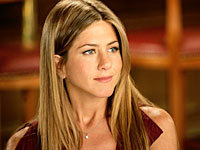 The film's only bright spots come from turns by its supporting cast. MacLaine is the only one truly stepping up to the plate, and she's always a firecracker -- just the way she spins her sarcastic lines gives the film it's few genuine chuckles. But I also have to hand it to Costner -- he has actually reshaped himself as a fine supporting man lately, especially with last year's criminally overlooked 'The Upside of Anger.' Even in a film as misconceived as this, he makes one almost forget such career-killing flops as 'Waterworld' and 'The Postman' with a subdued (if a bit lethargic) wit that is actually charming. Only Ruffalo looks even more embarrassed than Aniston, and they have so little chemistry together that it actually makes the icky idea of her sleeping with the same man as her dead mother almost sane.

Ultimately, there is little to say about 'Rumor Has It...' other than the obvious -- it is destined to be remembered as nothing more than another Hollywood train wreck. The only reason its HD DVD release is notable at all is because it is the format's first-ever "hybrid" disc -- meaning Warner has graciously included both a HD DVD version on one side of the disc, and a standard DVD version on the other. Unfortunately, it is hard to imagine anyone wanting to own 'Rumor Has It...' on any format, so that only makes the whole thing even more weird -- what an oddball film to pick for a such a milestone in high-def history.

Okay, so we all know this film sucks. But truly, it looks terrific on HD DVD. Gorgeous at times, in fact. This is the kind of colorful, brightly-lit, almost TV-movie-esque looking movie that really shines on home video, not to mention high-definition. Sparkly, sharp and crisp, this transfer has that three-dimensional, picture perfect look that makes you want to reach out and touch the screen -- however crap the movie is that you're looking at.

Detail is terrific throughout, with fine textures clearly visible (nice streaks in the hair there, Jennifer) and deep, rich blacks. Shadow delineation is also excellent, and contrast exemplary. Colors are also vibrant and well-saturated, but not overpumped like many recent transfers. I did sometimes feel fleshtones looked a little too processed, but then that is just the way film's look nowadays -- like everyone's face has been CGI'd more than Joan Rivers'. But a minor quibble -- any transfer that looks this smooth, clean and free of defects is hard to criticize.

Since 'Rumor Has It...' is the world's first hybrid disc, it was easy to compare the HD DVD transfer with the standard DVD version on the flipside. Clearly, HD DVD really proves itself in direct comparisons -- it really reminds you that even if standard DVD looks great on first glance, the level of detail high-def is capable of is simply and clearly superior to any previous home video format. The sense of reality that comes across on the HD DVD version is readily apparent, as are the more saturated and clean colors, thanks to HD's wider colorspace. I was also a bit surprised at how much sharper certain shots looked on the HD DVD transfer. If you have an even half-decent HDTV monitor, there is simply no contest between HD DVD and standard DVD.

'Rumor Has It...' boasts a nice English Dolby Digital-Plus 5.1 surround soundtrack, which is a slight improvement over the standard Dolby Digital 5.1 track. But it doesn't really matter much, because the film just is not that exciting a film aurally.

Certainly, this is a top-notch, professionally produced soundtrack. It almost sounds like it was airbrushed -- excellent dialogue reproduction (unfortunate, since the script is so bad), nice use of surrounds with the film's score and few songs, and a pleasing fullness to dynamic range. The Dolby Digital-Plus track adds a bit more heft and depth to the soundfield -- the surrounds feel a bit more real and transparent -- but there just is not much here going on to get excited about. Still, perfectly serviceable and entirely appropriate to the film.

What!? No two-hour making-of documentary? No multiple audio commentaries? No deleted scenes? Bloopers? Interactive map of 'Graduate' landmarks? Not even a pop-up trivia track?

Sorry kids, 'Rumor Has It...' has no extras at all. Even the theatrical trailer that appeared on the DVD side of the previous HD DVD/DVD combo edition is gone from this new HD DVD-only re-issue. Granted, it's hardly a devasting omission, but die-hard 'Rumor Has It...' fans (all two of you) may want to hold onto your combos.

I wish I could say 'Rumor Has It...' was even worth a rental, but it really is only interesting the way a train wreck is interesting. Granted, the film is handsomely produced, has a few amusing moments, and Shirley MacLaine is always a riot. But this film bombed for a reason, and even if taken on its own terms as a romantic comedy, Aniston is too hollow (both her performance and her character) to engender much interest. This HD DVD re-issue is perfectly fine, though -- the video is quite good, and the audio isn't bad, either. My only nitpick is that Warner hasn't re-encoded the disc to include the theatrical trailer that was on the DVD side of the combo. But you are saving $5 off of the old MSRP, so it's hardly a deal breaker.