Overview - From the producer of Scarface and Carlito's Way comes the action thriller Carlito's Way: Rise to Power. Jay Hernandez (Friday Night Lights), Mario Van Peebles (Ali), Luis Guzman (Carlito's Way) and Sean Combs (Monster's Ball) star in the gripping tale of the early years of gangster legend Carlito Brigante. Seduced by the power of the brutal New York underworld, he enters a deadly circle of greed and retribution. Assisted by his two brothers in crime, Carlito is on the fast track to becoming Spanish Harlem's ultimate kingpin. He quickly learns, however, that the only way to survive at the top is through loyalty to his friends and respect for the rules of the street.
OVERALL
Skip it

In the late '70s, New York State Supreme Court judge Edwin Torres published two novels about a fictional drug lord named Carlito Brigante. The first book, 1975's "Carlito's Way," followed the kingpin's rise to power and eventual arrest. His second book, 1979's "After Hours," followed Carlito's struggle with reform after his release from prison. In 1993, director Brian De Palma adapted "After Hours," nabbed Al Pacino and Sean Penn, and released the resulting film under the title 'Carlito's Way.' Despite the fact that it was a critical disaster, I remain a big fan of De Palma's violent morality tale. I only wish he’d filmed both halves of the story.

'Carlito's Way: Rise to Power' is a straight-to-video adaptation of Torres' first novel, directed by producer Michael Bregman ('The Bone Collector,' 'The Adventures of Pluto Nash'). The film follows the early '70s exploits of young Carlito Brigante (played by Jay Hernandez) as he works to build a successful heroin business. Taking advantage of the connections garnered by fellow ex-convicts Earl (Mario Van Peebles) and Rocco (Michael Kelly), Carlito and his crew fight to take control of the drug trade in Harlem. Standing in their way is a gangster named Hollywood Nicky (Sean "Puffy" Combs), the NYPD's best officers, and mob boss Artie Bottolota (Burt Young).

The original 'Carlito's Way' may not have been the best film to begin with, but without De Palma, Pacino and Penn on board, its prequel doesn’t stand a chance. In fact, sitting through 'Rise to Power,' I struggled to find a component of this project that compared favorably with the original.

The story certainly isn’t as strong -- Bergman only adapts the anti-climactic first half of Torres' novel, inadvertently killing the narrative flow (I can only assume the studio has another screenplay waiting in the wings that tells the next part of the story). As for the acting, Hernandez is the lone standout, but he doesn't have the fire or experience to match Pacino's performance. Finally, when it comes to action, 'Rise to Power' is a tease that flashes a lot of firearms, but rarely gets its gun off. In my opinion, there just isn't a single aspect of 'Rise to Power' that comes close to matching 'Carlito's Way.' .

'Rise to Power' is a bizarre release. It doesn't adapt the complete novel on which it’s based, it doesn't feature the original heavy hitters, and fans weren't exactly chomping at the bit for a 'Carlito's Way' prequel/sequel in the first place. I can only imagine it was greenlit in the hopes that fans of De Palma's film would be curious enough to pick up anything with "Carlito" in the title. Unfortunately, 'Rise to Power' is nothing more than the bastardized stepchild of a much better film. 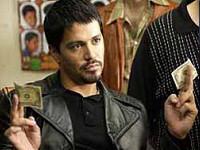 'Carlito's Way: Rise to Power' is presented with a serviceable 1080p/VC-1 transfer that handles the film's rough-n-tumble aesthetic well for the most part. Unfortunately, the filmmakers purposefully suppress the palette and amp up grain in an attempt to predate the look of the original 'Carlito's Way.' In my eyes, the result is a failure that only serves to distract the viewer from the movie itself. 'Rise to Power' still looks like a modern film -- just a poorly produced one.

The transfer does a decent job rendering the film's visual muck. Colors are stable, uses of red are respectably bold, and skintones are by and large natural (if a bit sickly at times). Detail is above average, as well -- pores, hair, clothing texture, and the fine print on money are suitably crisp despite the picture's faux-grit. I didn't catch any edge enhancement, artifacting, or source noise, but it would be nearly impossible to discern this sort of clutter from the picture's spiking grain field. I did catch a few other bothersome issues, however. Contrast is stark, but it still wavers from time to time. Black levels are deep, but crushed on a regular basis. In fact, after stumbling across a few shots with soft details and focus issues, I started to wonder how many of the transfer's "mistakes" were the product of the director's intention.

All in all, while this transfer may represent the filmmakers’ desired look and tone, I'm not a fan of the film's look at all. This HD DVD may be a step up from the poorly compressed standard DVD, but the upgrade isn't significant enough to impress. 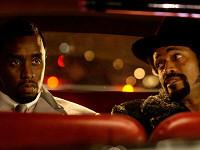 The Dolby TrueHD 5.1 surround track (48 kHz/ 16-Bit) on this HD DVD release is less obviously flawed than the video, but it ultimately suffers from the film’s straight-to-video, bargain-bin sound design. This may be a gangster flick, but there's relatively little gunfire or low-end elements on hand to take advantage of the LFE channel. When bass tones are utilized, they're strong, confident, and engaging. However, impressive dynamics require suitably dynamic scenes, and unfortunately 'Rise to Power' doesn't offer many showcase moments that allow this TrueHD track to truly demonstrate its power.

Although I struggled to hear two or three whispered lines, overall the film's dialogue is crisp and well balanced. Effects are clean, channel pans are transparent, and the soundstage is evenly distributed across the front of the soundfield. The rear surrounds are used from time to time, but mainly for street-level ambiance and crowded acoustics. I have to admit I expected a cash-in sequel like 'Rise to Power' to be inflated with extraneous violence for the sake of increasing its appeal, but as it stands this is a surprisingly quiet film that doesn't offer much to pump through your sound system. 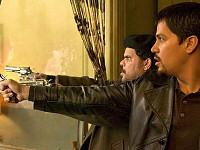 This HD DVD edition of 'Carlito's Way: Rise to Power' includes the same meager collection of supplements that appeared on the standard definition DVD. I know it's a straight-to-video release, but a commentary or a more thorough making-of documentary would have gone a long way to fleshing out the purpose and the timing of the prequel. 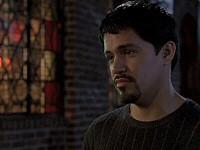 It's been a long time since I slapped a "Skip it" on a flick, but 'Carlito's Way: Rise to Power' fits the very definition of a cash-in project. To make matters worse, this HD DVD is hindered by an average transfer, an underwhelming TrueHD track, and a collection of weak supplements. Unless you’re desperate for a rental or unable to suppress your morbid curiosity, this one is best avoided.

Sale Price 2.49
Buy Now
3rd Party 2.49
In Stock.
See what people are saying about this story or others
See Comments in Forum
Previous Next
Pre-Orders
Tomorrow's latest releases