In June of 2006, Warner first released 'Full Metal Jacket' on HD DVD. A bare bones release, the disc was poorly received by reviewers and fans alike for its weak video transfer. A year later, Warner announced that it would release the film on HD DVD once again in a new 'Deluxe Edition,' as part of a new collection of five Kubrick classics. Remastered with new picture, sound, and a raft of bonus features, has Warner finally hit the high-def bull's-eye with this new version of 'Full Metal Jacket?' Read on... 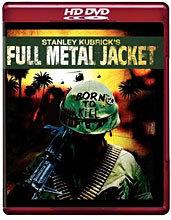 I've said before that there seem to be two different kinds of war movies -- those that rub our noses in the grisly reality of combat ('Saving Private Ryan,' 'Platoon'), and those that examine everything else around it, whether it be soldiers suffering the dehumanizing effects of boot camp or the cost of war on those back home ('Tigerland,' 'Gardens of Stone'). Leave it to master director Stanley Kubrick to again flout convention and fuse the two together in his 1987 Vietnam war movie, 'Full Metal Jacket.' Essentially a two-act play, Kubrick's would-be epic is often as frustrating in its incongruity as it is fascinating in its complexity.

In the film's first act, we meet Gomer (Vincent D'Onofrio), who may just be the most lovable slob of a grunt in movie history. Of course, being a Kubrick film, boot camp won't go so well for poor Gomer. Relentlessly tormented by his fellow soldiers and his "leatherlung" drill instructor (R. Lee Ermey, in a performance that became an instant classic), Gomer is always one step away from mental and physical collapse. I won't spoil the first act climax, but Gomer's Jack Torrance-esque disintegration will be internalized by Joker (Matthew Modine) who, as Act Two begins, is plunged into the heart and hell of war. Assigned to the front lines of battle as a combat journalist, Joker will at first attempt to remove himself from the mass atrocities he witnesses through the safety of his pen, but ultimately the realities prove too ugly to ignore, making his own descent into violence seemingly unavoidable.

I know I am not the first viewer to say as much, but 'Full Metal Jacket' leaves me split right down the middle. Given the film's structure, it's almost impossible not to take sides, and I personally found myself far more drawn in by the first half. The plight of D'Onofrio's poor Gomer is often mesmerizing, and is perfectly suited to Kubrick's sterile visual style. Kubrick has never been a particularly warm filmmaker, but here he seems to find a perfect thematic foil -- the military's systemic and unforgiving process of dehumanization. Kubrick's methodical pace and completely unsentimental worldview rips Gomer apart, and is an apt microcosm for brutal toll war takes on the human soul. Combined with director of photography Douglas Milsome's sterile visuals and a droning, unsettling score by Vivian Kubrick, the first half of 'Jacket' is its own mini-masterpiece.

By comparison, Act Two feels a bit more generic. Part of the problem is that Joker (though played earnestly by Modine) is simply less riveting a protagonist than Gomer. And thematically, Kubrick seems to simply be restating the same themes he so breathtakingly depicted in Act One, except in this case he's refashioned them out of war movie cliches (the grunts, the sniper, the injured screaming and dying all around). I've also never felt that Kubrick quite got a lock on how to stage the action, especially the film's climax, which is too much of an exercise in existentialism to be really gripping as a visceral experience.

Make no mistake, I still think 'Full Metal Jacket' is well worth seeing. The second half may not measure up the powerful first 45 minutes, but arguably the film's contrasts and jarring inconsistencies are what make it so intriguing almost twenty years later. 'Full Metal Jacket' may be a flawed film, but it remains one of the most challenging, unconventional war movies ever made. 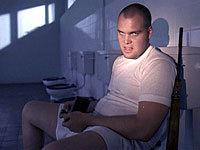 First released on HD DVD back in June 2006, 'Full Metal Jacket' has become almost legendary as one of the worst high-def catalog releases to hit either format. I was not at all fond of the video transfer on that release, and gave it quite harsh marks in my original HD DVD review. The source was poor, colors were off, and the image so soft it hardly looked like high-def at all. Thankfully, Warner seems to have taken the criticism to heart, and hasn't skimped on this new 'Deluxe Edition,' offering up a newly remastered transfer that's a clear and welcome improvement over the previous version.

I've never been a huge fan of the look of 'Full Metal Jacket' in general, so no matter how nice of an upgrade this new 1.85:1 widescreen 1080p/VC-1 encode may be (identical to the concurrently-released Blu-ray, by the way), I suppose I would be somewhat predisposed against it. That said, the film's naturalistic style of photography comes across much better here than on the previous HD DVD. Blacks are a bit richer, and contrast a bit bolder, which helps depth. While still not pristine, the print has been cleaned up a bit, reducing dirt and blemishes. Happily, visible detail is also heightened, with close-ups in particular revealing a good deal of texture, while wide shots are a bit sharper.

Most improved is color reproduction. I hated fleshtones on the earlier releases, which were so skewed towards red that everyone looked pig-faced. This new transfer is much more natural, if still not absolutely spot-on. Hues are a tad cleaner, and a bit more robust (most noticeably the deep blues of the infamous bathroom scene between Vincent D'Onofrio and R. Lee Ermey). Finally, compression artifacts are no longer issue, with the annoying banding of the previous release gone, and no other defects visible.

Does 'Full Metal Jacket' look like a million bucks? No, not even this second time around. This is still a twenty year-old catalog title that doesn't have an amazingly clean source. But this new transfer is a clear improvement, finally making 'Full Metal Jacket' a title you don't have to be embarrassed to have in your high-def collection. 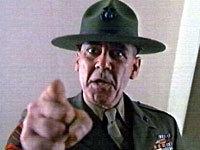 Last time 'Full Metal Jacket' hit HD DVD, all Warner could muster up was a meager Dolby Digital Plus 5.1 track (at 640kbps). Though that same track is included on this disc as well, Warner has also added an uncompressed Dolby TrueHD surround option (48k/16-bit/4.6mbps, comparable to the PCM 5.1 track on the Blu-ray). Unfortunately, while I'll always give props to a studio for supporting high-res audio, it's clear that the source is the same, and this track is obviously limited by the source material.

The mix is almost entirely front-heavy, especially the first half. The technology limitations of the time come through in the lack of heft to the frequency range. Highs and lows just aren't there to any discernible degree, with that flat, dull sound typical of soundtracks of the era. The songs included on the soundtrack are also weakly rendered, barely sounding like they have been remixed for stereo.

As before, the only time the mix comes alive at all is during the battle scenes during the film's second half, where there are occasional instances of effective surround use, and some interesting atmospheric trickery with Vivian Kubrick's atonal score. Still, even in uncompressed form, 'Full Metal Jacket' feels dated -- movement of sounds from channel to channel is pretty obvious, and I never felt truly engulfed in the action. Dialogue is also weakly rendered, and I was frequently frustrated that even at decent volume levels I had trouble understanding characters' speech. Although Warner still deserves some kudos for adding a TrueHD track, in all honestly it doesn't help much. 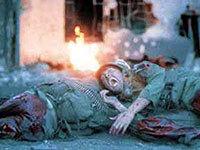 Of the five titles Warner has included in its new wave of Kubrick high-def releases (a list that also includes '2001: A Space Odyssey,' 'A Clockwork Orange,' 'Eyes Wide Shut' and 'The Shining'), 'Full Metal Jacket' has received the least attention in terms of supplements. This isn't a bad package per se, but it's not all that extensive, either.

First up is a screen-specific audio commentary that reunites cast members Adam Baldwin, Vincent D'Onofrio and R. Lee Ermey, plus historian and writer Jay Cocks. I was particularly looking forward to listening to this one, as the on-set animosity between D'Onofrio and Kubrick is said to be legendary. Alas, this is not a dirt-dishing track, although there are a few moments when a suddenly disquieted D'Onofrio recalls a shoot that was clearly quite physically demanding (due in part to the actor's intense weight gain for the role). Ermey is, as always, an irascible often hilarious presence, and alongside Baldwin clearly has an unusual level of respect and affection for Kubrick. Unfortunately, both Ermey and D'Onofrio disappear about halfway through, and so does much of the energy of this track. Baldwin's character is just not integral enough to the story to be of much interest, and Cocks' insights are all second-hand. Not unlike the film itself, this track has a split personality.

The only other major feature is the newly-produced featurette "Full Metal Jacket: Between Good and Evil." Running 31 minutes, this one features the above participants, plus Matthew Modine (sorely missed on the commentary) and authors John Baxter ("Stanley Kubrick: A Biography") and David Hughes ("The Complete Kubrick"). Though not all that substantial in terms of length, I preferred this featurette to the commentary. It better encapsulates the basic gist of the film's conception, casting and shoot, as well as it's place in the Kubrick canon.

Rounding things out is the film's Theatrical Trailer, which, like the "Between Good and Evil" featurette above, is presented in 4:3 full screen 480i/MPEG-2 video only.

Following a dismal initial HD DVD outing for 'Full Metal Jacket' back in 2006, the video transfer on this 'Deluxe Edition' is an appreciable improvement. Likewise, the included TrueHD track is probably as good it's going to get, and we even get a couple of worthwhile supplements, a first for 'Full Metal Jacket' on any format. Alas, even in upgraded form, I still can't give this one an unqualified rave, but it is a perfectly respectable effort that's no longer a rotten apple in Warner's high-def library.

Sale Price 6.99
Buy Now
3rd Party 2
In Stock.
See what people are saying about this story or others
See Comments in Forum
Previous Next
Pre-Orders
Tomorrow's latest releases