Overview - The best of Led Zeppelin's legendary 1973 appearances at Madison Square Garden. Interspersed throughout the concert footage are behind-the-scenes moments with the band. THE SONG REMAINS THE SAME is Led Zeppelin at Madison Square Garden in NYC concert footage colorfully enhanced by sequences which are supposed to reflect each band member's individual fantasies and hallucinations. Includes blistering live renditions of "Black Dog," "Dazed and Confused," "Stairway to Heaven," "Whole Lotta Love," "The Song Remains the Same," and "Rain Song" among others
OVERALL
Worth a Look 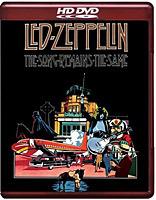 For lovers or big-screen rock excess, the late '70s was the absolute golden era. For whatever reason, during that period Hollywood became obsessed with bringing music to the box office masses, and unleashed an avalanche of ridiculously conceived pop spectacles starring a bizarre cross-section of performers that had no business getting anywhere near the silver screen. On any given weekend, bumping shoulders (and grinding pelvises) at the local multiplex were acts as disparate as the Village People ('Can't Stop the Music'), ELO ('Xanadu'), the Bee-Gees and Peter Frampton ('Sgt. Peppers Lonely Hearts Club Band') and even Sweden's biggest music export, ABBA (the immortal 'ABBA: The Movie'). It was a virtual cinematic car crash, with one spectacular disaster after another going down in flames.

It's surprising in hindsight, but rock gods Led Zeppelin somehow got caught up in all of this hysteria, and in 1976 they released their own big-screen epic 'The Song Remains the Same.' Part concert movie, part "dramatic interpretation' of their music, it's not jaw-droppingly awful on the level of, say, a 'Xanadu' (this is the Zeppelin, after all, not ELO), but the movie is ill-conceived enough that you have to wonder what the Led boys were thinking. Were rock egos that big in the '70s that a top act like this thought it prudent to appear in something this grandiose and pretentious?

According to the film's original promotional materials, 'The Song Remains the Same' was intended to be "...the band's special way of giving their millions of friends what they had been clamoring for -- a personal and private tour of Led Zeppelin." The end product, however, turned out just a little bit different. Originally conceived as a straight-ahead concert film, the bulk of the movie was shot during a three-night stint at Madison Square Garden during the band's hugely successful 1973 world tour. Unfortunately, much of the material turned out so poorly that it was virtually unusable, and the band was also unhappy with many of its performances. So the the film's producers hastily came up with a solution -- scrap most of the movie (including firing the original director, Joe Massot, and replacing him with Peter Clifton) and reconfigure it from top to bottom as a more traditional narrative, albeit with some concert performances spliced in.

Suffering from all of the bloated pomposity of the '70s "prog-rock" era, the "dramatic" segueways added to 'The Song Remains the Same' are virtually interminable. After a long opening sequence of the band arriving by plane (that sets up some forgettable plot about a robbery -- yawn), we're treated to a series of downright loony "fantasy" interludes that are supposed to give us insight into the personalities of each of the band members. There's John Paul Jones, reading "Jack and the Beanstalk" to his daughters. John Bonham drag racing to the tune of "Moby Dick." Jimmy Page climbing a snow-capped mountain in search of a hermit (seriously, I'm not kidding). And Robert Plant getting to ride a horse across a wind-swept landscape, his flowing locks making him look like a lost hippie Prince from an abandoned Disney theme park ride. It's all meant to "symbolize" something, but in such an overt and heavy-handed way that it inspires laughter more than profundity.

Thankfully, 'The Song Remains the Same' also features concert performances of nearly a dozen classic Led Zeppelin tunes, and that's the reason to see the film. Although the band would subsequently reshoot some of the close-ups and other insert shots on a soundstage (leading to a few glaring continuity errors), it is these scenes that prove without a doubt that Zeppelin is arguably the greatest hard rock band in history. During the 1973 tour the were often at the peak of their powers, and indeed few other acts can touch them even now. The interaction of the band members achieves an intensity that borders on the orgiastic at times, and moments in "Black Dog," Whole Lotta Love" and of course "Stairway to Heaven" deliver genuine goosebumps.

Unfortunately, one must still endure a great deal of self-indulgent dreck in order to enjoy those moments of musical nirvana. Die hard Zeppelin fans won't need any arm-twisting, of course, but if you're only a casual admirer of the band -- or you're still confused as to what all the fuss is about -- you may find your finger twitching on the remote's fast-forward button through a good portion of the film's runtime. Watched as a greatest hits collection of concert performances, 'The Song Remains the Same' is absolutely essential. As a piece of rock cinema, however, it's a pretty miserable failure. 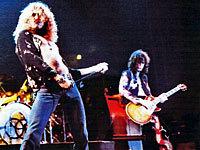 Considering the fact that 'The Song Remains the Same' has been delayed on HD DVD, oh, about 1,543 times now, a healthy amount of anticipation has built up around this release. After such a long wait, fans will be expecting a top-flight remaster, which this 1080p/VC-1 encode almost achieves. Like the film itself, the concert scenes rule, but the rest is a bit more suspect. (Note that this VC-1 encode is identical to the Blu-ray version Warner released on February 26, 2008.)

The hokey interlude material can be dodgy. Blacks are never rock solid, and there is some noticeable variance in contrast. The print is also not pristine, with uneven grain and a few speckles (though nothing severe). The image always lacks depth and the kind of fine-textured detail that high-def can showcase even on a film that's as old as this one.

That said, the concert scenes fare much better. Though blacks are never sensational, contrast is more consistent and colors bolder. Stage and lighting design in the '70s is certainly archaic by today's standards, but the nice use of strong reds and blues on key songs is rendered with nice stability. The more dynamic visuals also help create apparent depth, with the image sometimes boasting nice dimensionality for a 1976 film. This is also a solid VC-1 encode, with surprisingly little in the way of banding or noise issues.

Warner offers three audio choices (again identical to the Blu-ray): Dolby TrueHD 5.1 Surround (48kHz/16-bit), Dolby Digital 5.1 Surround (640kbps) and Dolby Digital 2.0 Stereo (192kbps). Like the video, this is a very impressive remaster of elements now past their third decade -- if only all concert films from 1976 sounded this good.

I was most impressed by the hefty dynamics of the TrueHD mix. I wasn't expecting this much kick from the subwoofer, nor the clarity and realism of the higher ranges of the spectrum. Instruments are forceful in the mix, particularly the lead guitars and drums, which are very pronounced. Warner has also clearly spent some money to spiff up the original elements, for there are none of the audible hiss, harshness, or dropouts one usually expects on live recordings of the era.

Surround use is a bit more sporadic, however. There is no real use of the complete soundfield during the concert sequences, aside from crowd noise. Better represented are the dramatic interstitials, which at least boast some discrete effects for things like location sounds and the like. Dialogue here is serviceably reproduced, with decent stereo separation and some quieter passages a bit muffled. But all in all, 'The Song Remains the Same' sounds far better than I expected.

(Note: Some readers who have managed to snag early Blu-ray copies of 'The Song Remains the Same' have reported issues with audio dropouts on the TrueHD track. However, there have been no such reports with this HD DVD version. Indeed, the audio played flawlessly, and I encountered no hiccups, dropouts, or other anomalies.)

Warner offers a supplement package that, at first glance, looks quite substantial. Unfortunately, the runtime of all of these bulletpoints is actually rather slim, so you'll be able to get through all of it in less than an hour. (Note that all of the video-based material is 480p/i/MPEG-2 only, and no subtitle options are offered.)

'Led Zeppelin: The Song Remains the Same' is typical of rock 'n' roll movies of the '70s -- the concert scenes crank, but the "dramatic" interludes are utterly dreadful. So be prepared to have the fast-forward button handy because the only reason to watch 'The Song Remains the Same' is the music. This HD DVD is every as solid a release as the recent Blu-ray edition, however, with well-mastered video and audio (even if it is not revelatory), and a few vintage extras. This is of course a must for Led Zeppelin disciples, and worth a rental for those who don't mind a little cheese with their classic rock.

Sale Price 20.68
Buy Now
3rd Party 6.95
In Stock.
See what people are saying about this story or others
See Comments in Forum
Previous Next
Pre-Orders
Tomorrow's latest releases