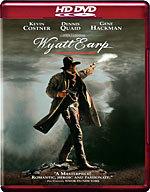 Every once in a while, two films emerge at around the same time with such similar subject matter that one can’t help but be compared to the other, often splitting audiences and critics into two polarized camps. The '90s saw a few such high-profile movie feuds, including 'Armageddon' and 'Deep Impact,' 'Volcano' and ‘Dante's Peak,' and 'Tombstone' and 'Wyatt Earp.' In each case, the studios and filmmakers were well aware of their competition and did everything possible to distinguish themselves in the marketplace.

The case of 'Tombstone' and 'Wyatt Earp' is particularly interesting, because both projects originated from the same script. In 1989, writer Kevin Jarre and actor Kevin Costner joined forces to develop a biopic of legendary lawman Wyatt Earp. Kurt Russell agreed to star and even helped drum up funding for the film. Ultimately, however, Jarre and Costner's visions of Earp differed dramatically. Unable to resolve their differences, the two split. Russell followed Jarre to make 'Tombstone,' while Costner used his post-'Dances with Wolves' clout to attract writer/director Lawrence Kasdan (who had directed Costner in 'Silverado') to 'Wyatt Earp.' 'Tombstone' was the first to theaters in December of 1993, but 'Wyatt Earp' followed shortly thereafter in June of 1994.

Broader in scope compared to ‘Tombstone,’ Costner's ‘Earp’is a more intimate tale, tracing Earp’s footsteps from his teen years through adulthood. As presented in the film, young Wyatt is constantly at odds with his father (Gene Hackman), and jumps head first into a life consumed by tragedy and trouble. Although he works countless jobs over the years, Earp’s through-line is a compulsive desire to introduce justice to a society overrun with lawlessness. Ultimately, of course, he works his way to the dangerous town of Tombstone where, alongside his brothers Virgil (Michael Madsen) and Morgan (Linden Ashby), he stumbles into a battle for his life and his legacy.

The film is certainly epic in its plotting. The various subplots and character introductions are too numerous to mention here, but I will say that the film’s star-studded cast often makes ‘Wyatt Earp’ feel like a pan of the audience at a Hollywood awards show. In addition to Hackman, Madsen and Costner (as Earp himself), the film also features performances from the likes of Isabella Rossellini, Jim Caviezal, Tea Leoni, Catherine O'Hara, Mark Harmon, Bill Pullman, Tom Sizemore, Mare Winningham, as well as a virtual who’s who of familiar character actors.

Unfortunately, the film’s extensive cast is part of a larger problem that leads me to personally prefer 'Tombstone' over 'Wyatt Earp.' When I watch 'Wyatt Earp,' I often feel lost -- not because I don't understand the story or the characters, but because I have to keep track of so many different themes, subplots, and characters. I can see why Jarre and Costner were at such odds; their two projects couldn't be more different.

Still, 'Wyatt Earp' is certainly not without its merits. To be sure, the performances are rather good, and the dialogue feels authentic. Likewise, the cinematography is sweeping, and Kasdan clearly does what he can to balance an overcrowded script. I love that the film provides glimpses into Earp's young life that reveal the motivations, influences, and experiences that shape his later behavior. His relationships are complex, and as presented in the film, he's a flawed hero with plenty of skeletons in his psyche.

Still, at the end of the day, 'Wyatt Earp' feels more like a television mini-series than a feature film. Even at three hours, the runtime doesn't provide adequate breathing room for the overwhelming number of stories, characters, and time periods. As a result, the supporting characters aren't nearly as fleshed out as Earp, and more often than not, their motivations are left to the imagination.

Most annoying in my opinion is the film's truncated look at Earp's time in Tombstone. As presented in ‘Wyatt Earp,’ the events and tragedies surrounding the OK Corral are the culmination of the consequences of his life, yet his response is over in a flash, and the film abruptly jumps ahead to the twilight of Wyatt's years. The result is a neutered climax that fails to deliver on the film’s dense earlier plotting.

Although I personally feel it pales in comparison in comparison to ‘Tombstone,’ ’Wyatt Earp' is by no means a bad film; I just think it tries to incorporate too much material and feels sloppy as a result. I look forward to reading differing opinions in the forums. 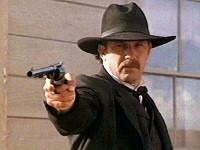 Arriving on both HD DVD and Blu-ray with a 1080p/VC-1 transfer, unfortunately I found the picture quality on this disc somewhat problematic.

Among the larger issues: fleshtones fluctuate, night scenes fail to completely resolve black tones (leaving the darkness cloaked in a haze), and there are a few instances of contrast wavering. There’s some consistent source noise, and I also caught some minor artifacting, some occasional spiking in the grain field, and a pervasive use of light edge enhancement (which has no business being on an HD DVD).

Having said all that, this transfer still surpasses the 2-disc Special Edition DVD, with bolder colors, sharper details, and a cleaner image. I was happy to see the clarity of the environment, the textures of the period costumes, and the imperfections in the actors' skin. Delineation is quite good, and daytime exteriors look particularly sharp. Whites aren't too hot (a problem you might expect from some of the shots here), and the entire image has nicely-balanced contrast.

All things considered, while this high-def transfer of 'Wyatt Earp' is certainly an improvement over earlier editions of the flick on home video, it has too many lingering issues from its days on DVD to compare favorably to other HD DVD releases from the same time period. 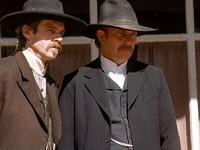 The mediocrity continues with a Dolby Digital-Plus 5.1 surround mix (640 kbps) that lacks the general power I've been accustomed to hearing with high definition releases.

While bass booms are definitely present, they didn't hit me in the chest with any sort of vibrancy. For a film that relies on placing the viewer in the midst of chaotic shootouts, surprisingly, most of the sound lingers in the front channels. The resulting action often feels two-dimensional when it should flood the soundscape and bombard the listener from all angles. Most disappointing is the fact that outside of a few key scenes, the rear channels are mostly reserved for ambiance and acoustics.

That being said, this one’s certainly not a total loss. The dynamics are broad, dialogue is well prioritized, and gun blasts have a fitting timbre. Treble tones are rich and spread perfectly across the front channels. Likewise, the LFE channel has some mild fun with the on-screen violence, adding a bit of weight to airy sounds. It also helps that channel pans are swift and natural. The soundfield is convincingly solid, and source directionality is decent (albeit a bit stocky).

All in all, though it’s not dramatically better than you’ll find on the 2-disc special edition DVD, the audio here works well enough that it should satisfy fans of the film --just set your expectations accordingly.

(Note that both the Dolby Digital-Plus track on this HD DVD and the standard Dolby Digital track on the Blu-ray disc feature the same audio bitrate, and in a direct compare, I couldn't detect any differences between the two.) 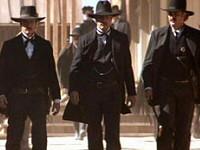 Although this HD DVD includes all of the features from the 2-disc Special Edition DVD released in 2004, that’s something of a hollow trophy as (despite the “Special Edition” moniker) that wasn’t a particularly feature-packed release.

"It Happened that Way" (15 minutes) is mostly promotional fluff, featuring a handful of on-set supporting actors revealing their thoughts on the film. Kasdan and Costner show up as well, but nothing here is particularly enlightening, and anyone hoping for some discussion about the turmoil at the heart of bringing 'Wyatt Earp' to the screen will be disappointed.

"Wyatt Earp: Walk with a Legend" (19 minutes) isn’t much better. Hosted by Tom Skerritt, this one includes some behind-the-scenes footage and more interviews with Kasdan, Costner, and other members of the cast and crew. ' I hoped for a more detailed look into the historical account and the changes that were made to bring the story to the screen, but unfortunately there's very little examination of the accuracies/inaccuracies present in 'Wyatt Earp.’

Rounding out the package are a group of middling "Lost Scenes" that rely on slow-paced character moments (and don't add much to the plot) as well as the film's theatrical trailer.

(Note that all of the supplements listed above are presented in 480i/p only; among these, only the trailer is presented in widescreen video.) 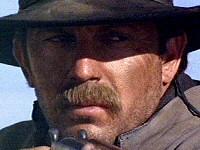 Film buffs will likely debate the merits of 'Wyatt Earp' vs 'Tombstone' until the end of time. I personally prefer ‘Tombstone,’ but you’ll just have to watch both and see where you stand. Unfortunately, regardless of your thoughts on the film itself, this HD DVD is middle of the road at best –- both the video and audio are average, and the supplemental package is weak. I recommend giving this one a rent before deciding whether or not it’s worth adding to your collection.

Sale Price 9.79
Buy Now
3rd Party 9.79
In Stock.
See what people are saying about this story or others
See Comments in Forum
Previous Next
Pre-Orders
Tomorrow's latest releases