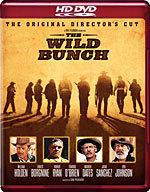 There's nothing quite like the simple joy that's derived from a "one-last-heist" flick, the surprisingly resilient sub-genre of film that tells the tale of the thief who intends to follow a godly path after one final dance with the devil.

An early entry in the sub-genre, 'The Wild Bunch' has influenced action films and heist flicks ever since it first hit theaters in August of 1969. Taking advantage of a then-fading Hollywood production code, boundary-pushing director Sam Peckinpah ('The Getaway,' 'Ride the High Country,' and the controversial 'Straw Dogs') delivered a groundbreaking and exhilarating film that's more than stood the test of time -- as far as I'm concerned, this is a movie everyone should see at least once.

The film itself follows a gang of criminals planning a complicated robbery near the US/Mexican border in 1913. Pike Bishop (William Holden) leads the ragtag group of anti-heroes (including Ernest Borgnine, Warren Oates, Ben Johnson, and Bo Hopkins) and is determined to pull off one last heist so that he can retire peacefully from his gun-slinging lifestyle. After being betrayed by his former partner, Deke Thorton (Robert Ryan), Bishop negotiates a deal with a Mexican general (Emilio Fernandez) to steal a shipment of guns from a US army train. With Thorton in hot pursuit, Bishop and his posse will be forced to contend with an increasingly problematic set of circumstances that threaten their loyalties, their riches, and their very lives.

Sam Peckinpah has been lovingly referred to as "Bloody Sam," and he more than lives up that moniker with 'The Wild Bunch,' which features more than its fair share of blood sprays, fire splashes and gunslingers tumbling to the ground in extended slow motion. The film’s on-screen violence is so graphic that when it was submitted to MPAA for theatrical re-release in 1993, it initially received an NC-17 rating. But while the film’s imagery may be disturbing, for once it’s not without purpose, as the film not only depicts violent acts, but explores our relationship to them (the Vietnam War was at its height at the time of the film’s release, and many have interpreted Peckinpah’s use of violence in the film as an allegory for violence of the then-raging war).

But it's more than just Peckinpah's manipulation of violent imagery that makes 'The Wild Bunch' stand out from the crowd. The script is quick and tight, yet it doesn't pass up opportunities to flesh out the vulnerability of its hard–edged characters. These aren't your typical invincible Hollywood good guys -- they're susceptible to the cruelties of life, and the fragile bonds of human friendship. Notably, when characters in ‘The Wild Bunch’ die, as an audience we actually mourn them, warts and all -- it’s an effect that few action movies have achieved since Peckinpah’s time.

All of this is not to say the film is dismal or without hope. The chemistry between Bishop and his gang is genuine, and there's a breezy fluidity to their conversations that makes them feel like old friends. For a film so saturated in tragedy, I’m always surprised how often I find myself grinning while watching it. There are many laughs to be had, clever dialogue that's instantly quotable, and plenty of well-constructed subplots that help the film inhabit several different genres at once.

The granddaddy of the modern heist film, nearly forty years since its original release, 'The Wild Bunch' remains a thrilling and thought provoking ride. Do yourself a favor and don't ignore this one because of its age or genre -- ‘The Wild Bunch’ is a cinematic experience that shouldn't be missed.

Note that this edition of 'The Wild Bunch' is billed as the "Original Director's Cut," but don't get too excited – this 145-minute cut of the film is the same one that’s been available on DVD since 1999, and is actually the same version that briefly appeared in theaters when the film was first released in 1969. Shortly after its theatrical debut, the studio removed eleven minutes of footage (mainly character development and history) to allow for more screenings over the course of a given day. 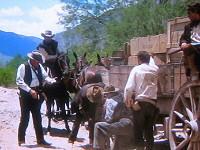 'The Wild Bunch' arrives on both HD DVD and Blu-ray with a striking 1080p/VC-1 transfer that easily outclasses its earlier standard DVD counterparts. The colors are bold and vivid -- blood pops particularly well, while sepia tones are languid and naturally warm. Contrast is spot-on with inky blacks and comfortable whites that keep the sunlit scenes from feeling overexposed. Detail also receives a huge upgrade that’s immediately apparent from the opening shots of the film to the end credits. Sweat and grime are clearly defined. Clothing textures, hair, and skin are expertly rendered and don't fall prey to shimmering or softness.

Although the film’s exterior shots benefit the most from the upgrade to high definition, interiors look impressive as well. Even scenes lit by firelight aren't muddy or murky -- they retain a crispness and vibrancy that surpasses other catalog releases available on high-def. Again, the detail is what caught my attention -- the dry grass, the fractured pebbles on the ground, and the imperfections in the weathered skin of the various cast members are all breathtaking. I’d even go so far as to say that 'The Wild Bunch' falls just shy of the go-to transfer of 'The Searchers' (another classic Warner Brothers western that received the white glove treatment when it was released to high-def).

Alas, all is not perfect. Delineation is occasionally hampered by Peckinpah's stark shadows (the dark areas of the image often come close to crushing) , and some edge enhancement appears to have been carried over from the DVD remaster. Finally, although source noise isn’t a consistent problem, more finicky viewers will notice a few limited instances of artifacting and banding.

Despite these minor issues, fans of the film will be ecstatic to see 'The Wild Bunch' basking in all its high definition glory -- as it is, a toddler could spot the astounding visual differences between the film’s most recent 2006 two-disc Special Edition DVD and this new HD DVD version. 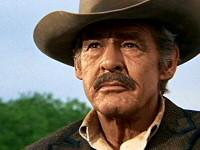 Although the original two-channel sound of 'The Wild Bunch' was remixed for 5.1 surround when it hit DVD, the result stumbled a bit more often than it soared. That same remastered mix is presented here with a higher bitrate in a Dolby Digital-Plus 5.1 surround mix (640 kbps), but unfortunately a slight improvement in the technical attributes of the track can't make up for the inherent problems leftover from the film's release on DVD.

There are several fundamental flaws. First, the dialogue and the film score have been remixed using different sources, and it shows -- the film’s musical moments boast impressive dynamics, while conversation and other elements in the soundscape often sound disjointed and hollow. Second, the soundfield tends to drift toward the front channels, leaving the rear speakers to cover ambient noise and more heavy-handed effects like gun blasts and explosions. Finally, accuracy and directionality have been tossed out the window. Sounds often appear to have been randomly placed, and it seems little effort was put into taking advantage of surround sound to create a convincing illusion of the film's environments.

Happily, all is not lost -- the sound elements are generally well prioritized, pans are natural on the rare occasions when they occur, and dialogue is crisp. Bass tones also have a welcome resonance that doesn't betray the on-screen violence, while the treble ranges of the music have a nice sense of vibrance that properly enhances the film's action. Although this mix just can't compare to better tracks on other high definition releases, taking the source into account, this HD DVD does the best it can with what it’s given.

(Note that both the standard Dolby Digital-Plus track on this HD DVD and the Dolby Digital track on the Blu-ray edition of this title feature the same audio bitrate, and in a direct compare, I couldn’t detect a distinguishable difference between the two.) 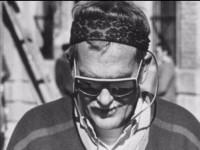 ‘Wild Bunch’ fans will be happy to learn that all of the features included on the feature-packed two-disc Special Edition DVD have been ported over to this HD DVD edition.

First up is an adequate commentary with Sam Peckinpah biographers/documentarians Nick Redman, Paul Seydor, Gamer Simmons, and David Weddle. Don't get me wrong -- this track is packed with facts and interesting tidbits about Peckinpah's films, stylistic choices, and his life in general, but it all ends up feeling rather dry. It's worth giving a shot, but don't be surprised if you find yourself skipping around after twenty minutes, listening for something exciting.

Things improve dramatically with "Sam Peckinpah's West: Legacy of a Hollywood Renegade" (83 minutes), a thorough examination of the director and his influence on cinema. Hosted by actor Kris Kristofferson, this is a vast exploration of Peckinpah's films, his early work, and even his struggles with substance addictions. While this documentary focuses only on the Westerns in Peckinpah's cinematic canon, it's an excellent companion piece to the film itself, and includes interviews with editor Garth Craven, writer Stanley Booth, producer Dan Melnick, critics like Roger Ebert, and actors like Billy Bob Thorton and Benicio Del Toro.

"The Wild Bunch, An Album in Montage" is also very well made and kept my attention throughout its 33 minute running time, combining a generous helping of behind-the-scenes footage (shot in black-and-white with a handheld camera) with finalized scenes from the film. Narrated by Nick Redman, several of the surviving cast and crew members return to lend voiceovers to the aging footage. Most notably, Ed Harris sits in to provide the voice of Peckinpah as the director chats on-screen with his cast and crew. Harris's voiceover is eerily disarming since Peckinpah died in 1984 -- the absence of his actual voice serves as a bitter reminder that Peckinpah won't be delivering any new films for future generations.

Next up is an "Excerpt from A Simple Adventure: Sam Peckinpah, Mexico, and the Wild Bunch" (24 minutes), a look at the Mexican shoot and locations used in the film. This one doesn't justify its length but is a decent addition for completists and hardcore fans.

Rounding out the supplemental package are a number of of poor-quality "Additional Scenes" (9 minutes) and a "Sam Peckinpah Trailer Gallery," featuring trailers for 'The Wild Bunch,' 'Ride the High Country,' 'The Getaway,' 'The Ballad of Cable Hogue,' and 'Pat Garrett and Billy the Kid.'

(Note that all of the video-based supplements listed above are presented in 480i/p video only.) 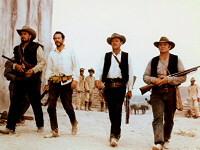 'The Wild Bunch' is a genre classic that’s arguably influenced every action film that's come since. The script, performances, and style are all excellent, and have stood the test of time. As an HD DVD release, this one's also quite strong, boasting a wonderful video transfer that's a clear improvement over earlier DVD editions, plus a complete package of extras that compliments the film rather well. The only disappointment is an average audio mix that can't cover up the inadequacies of its source, Still, don't let that stop you from picking this one up – overall this is a great presentation of a great film.

Sale Price 10.81
Buy Now
3rd Party 2
In Stock.
See what people are saying about this story or others
See Comments in Forum
Previous Next
Pre-Orders
Tomorrow's latest releases