Overview - A sweeping epic charting the early years of the Civil War and how campaigns unfolded from Manassas to the Battle of Fredericksburg, this prequel to the film Gettysburg explores the motivations of the combatants and examines the lives of those who waited at home.
OVERALL
Rent it First 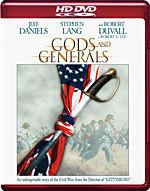 Although it quickly disappeared from theaters upon its original release in 1993, 'Gettysburg' earned praise from critics and history teachers alike, and ultimately went on to greater success on VHS and DVD. Ten years later, producer Ted Turner and director Ronald Maxwell returned to the scene of the crime, releasing a prequel to ‘Gettysburg’ starring several of the earlier film’s main cast members.

Based on the novel of the same name by Jeffrey Shaara, 'Gods and Generals' recounts the harrowing military encounters and maneuvers of the Confederate army in the two years preceding the Battle of Gettysburg. The story focuses on two opposing officers -- Union Colonel Joshua Chamberlain (Jeff Daniels) and Confederacy Lieutenant Thomas "Stonewall" Jackson (Stephen Lang). Chamberlain is a former professor who left his career to enlist, while Jackson is a religious soldier who advanced through the ranks to become one of Robert E. Lee's (Robert Duvall) most-trusted officers. The film follows these men as they try to preserve their integrity and beliefs through the battles of First Bull Run, Fredericksburg, and Chancellorsville.

I have to confess that it took a tremendous amount of patience on my part to make it all the way through 'Gods and Generals.' While 'Gettysburg' is a stirring Civil War cinema that I'd compare favorably to masterpieces like 'Glory,' this prequel is incredibly flat. Many have complained about the film’s three-and-a-half hour runtime, but that in and of itself was a non-issue for me. Instead, my problems were with the faulty script, uneven pacing, and plodding character development that litters the film from beginning to end.

The dialogue in 'Gods and Generals' should serve as a lesson to budding filmmakers in the dangers of exposition. The conversations seem directed at the audience more than at characters in the film. As a result, character interactions function as debates and lectures on Civil War history, while relationships rarely register as authentic. Most of the dialogue is overwritten, and the exchanges between the actors often feel unnatural and forced.

Making matters worse, the battle scenes aren't heart-wrenching or tense -– instead, they’re often unintentionally laughable. The filmmakers enlisted Civil War re-enactors, and it shows. Battlefields are littered with blank-faced extras who are clearly in no danger whatsoever. If I had to watch one more person double over and slink dramatically to the ground, I myself might have longed for a similar fate.

I wasn't even impressed with the film's visual aesthetic -- overlit and boring, the backgrounds look like dressed sets instead of lived-in locations. The grime on uniforms appears slathered on, costumes look new and barely weathered, and the men don't register as people who have been living outdoors and on the move for years. Ugly matte paintings and transparent CG that looks clumsy and out of place certainly doesn’t help, either.

With all that being said, 'Gods and Generals' isn't a terrible movie per se. It's just a flawed one that seems to crumble under its own ambitions. I admire the level of historical accuracy the filmmakers attempted to bring to the table and the story itself is refreshingly complex (most Civil War films would have us believe the that the war was about slavery and nothing else). Still, I'm pretty sure a stronger screenplay, a bigger budget, and a tighter edit could've retained the positives while saving the film from becoming the rambling mess that it is. 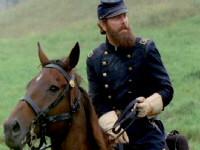 Presented on HD DVD and Blu-ray using identical 1080p/VC-1 transfers, 'Gods and Generals' has its strong points, but overall I found it visually disappointing compared to most in its high-def brethren.

First, the good news. Colors are more robust than they were on the weak standard-def DVD transfer, and fleshtones benefit from the improved saturation. Black levels are deep, contrast is spot on, and the picture sometimes has a welcome level of depth that makes elements on the battlefields pop. Likewise, the print is very clean and doesn't suffer from source noise, scratches, or blemishes.

Unfortunately, the overriding issue here is a persistent softness -- for every technically proficient scene, there is another that is blurry and poorly defined. Much of this bothersome softness occurs during exterior shots and results in smeared bunches of leaves and patches of grass. Even hair and fine texture details in these scenes become muddled. If this problem were limited in scope, I might have been more forgiving, but the softness is so pervasive that I found myself continually distracted.

All things considered, this one's certainly a step up from the standard DVD, but it remains a disappointment in a crowded field of superior high-def catalog transfers. 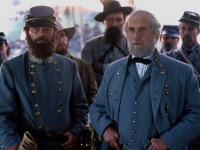 Although I was initially disappointed that Warner hadn’t granted 'Gods and Generals' with a high-res audio track, the truth is that the Dolby Digital-Plus 5.1 surround track (640 kbps) on this disc does a nice job, exhibiting plenty of low-end power that keeps the weighty soundscape rumbling. The LFE channel comes alive in the battle scenes as canons boom and debris scatters. Dialogue is well-prioritized, and the cracks of firing guns are stable and crisp. Pans are subtle and believable, directionality is chaotic but accurate, and ambient touches in the rear speakers stretch the soundfield quite wide.

Still, overall 'Gods and Generals' is a fantastic audio experience; fans will revel in the powerful bass tones during the film's battle sequences, and only audiophiles will be upset by the slight technical inconsistencies.

(Note that both the Dolby Digital-Plus track on this HD DVD and the standard Dolby Digital track on the Blu-ray disc feature the same bitrate, and in a direct comparison, I couldn't detect any differences between the two.) 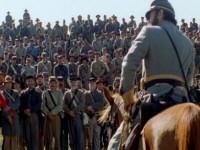 I believe this is a first. Although it's not officially an HD DVD/DVD combo release, this HD DVD edition of 'Gods and Generals' makes use of the same technology, putting the majority of the disc's supplements on a standard-def flipside of the disc, presumably to give the three-plus hour feature all the breathing room it needs on the 30GB HD DVD side of the disc.

Other than the fact that you’ll need to flip the disc to view some of them, the extras here are identical to those included on the single-sided Blu-ray release. Both are presented in 480i, and both include the full suite of extras from the flick’s original standard-def debut in July of 2003.

First up (on the HD DVD side) is an "Introduction by Executive Producer Ted Turner" (3 minutes) that gives the media mogul an opportunity to discuss why he invested a reported 60 million dollars in a follow-up to 'Gettysburg.' It's a decent intro that almost makes Turner seem like a normal guy with fond memories of his childhood. At the very least, it sets a favorable tone for an otherwise disappointing film.

Next comes a spotty audio commentary with director Ronald Maxwell and two historical advisors who worked on the film, a professor named James Robertson and a museum director named Keith Gibson. Large gaps of silence fill the track, and I found it difficult to re-focus each time the discussion begins anew. I would say the three men only discuss half of the film (and that's being generous). As a result, I became increasingly frustrated that these silences weren't allotted to other commentators, such as the actors, other crew members, or the author of the novel. While the commentary as it is does contain a lot of information, I imagine there are tons of facts and anecdotes that could’ve enhanced this track.

We now proceed to the supplements side of the disc. Although they’re billed as "documentaries," the three included featurettes don't adequately sink their teeth into the material. "Journey to the Past" (21 minutes) is a studio puff piece that explains the most obvious details about the characters, the stories, and the battles in 'Gods and Generals.' "The Authenticities of the Film" (14 minutes) explores the filmmakers' attention to detail with regard to some of the settings, costumes, and characters. "The Life of Stonewall Jackson" (15 minutes) includes interviews with author Jeff Shaara and allows him to share his passion for the Civil War and its soldiers. 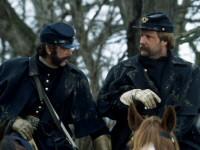 'Gods and Generals' is a flawed piece that works better as an educational tool rather than as a feature film. This new HD DVD edition is equally problematic, with a soft transfer and a bland set of supplemental features that drag the entire release down. The only aspect of this disc that’s anything better than mediocre is the audio package. If this release still sounds intriguing, I recommend giving it a rent before making a purchase decision.

Sale Price 30.09
Buy Now
3rd Party 30.09
In Stock.
See what people are saying about this story or others
See Comments in Forum
Previous Next
Pre-Orders
Tomorrow's latest releases